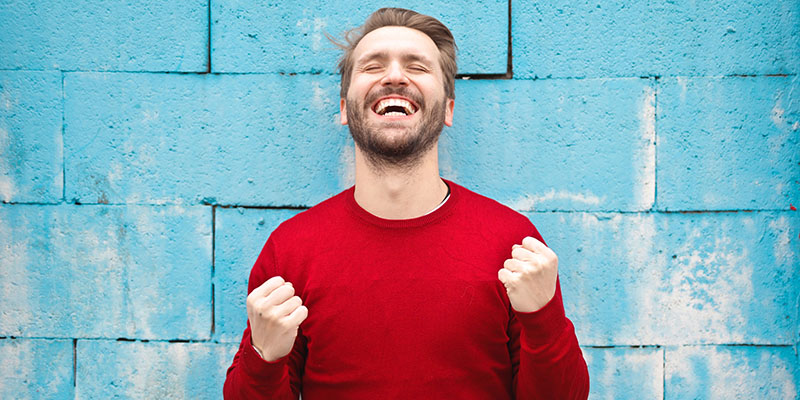 A Positive Attitude: The Foundation Of Game And Life

You may not think it matters, but the way you think can pretty much shape your entire existence. A positive attitude has a profound effect on how we behave, and the choices we make.
In every situation in life, you have two options; you can think of the positive side of it, and roll with punches, or dwell on the negative. Doing the latter will only make things worse.
Finding the positivity in life will not only make you happier, but your happiness will become contagious and more people will want to be around you—that includes women.
Unfortunately, we live in a world where we’re constantly told to worry about things like money, status and even the way we look.
The first step in thinking positive is finding a way to make yourself free from concern.
Learning how to think positive will dramatically influence your life. Before you know it, you’ll accomplish more than you ever thought you could.
The key is learning how to change your negative thinking patterns so that they carry over into your life.
The good news it’s not as hard as you think, and the results will only reinforce your positivity. Good things like dating women, meeting career goals and, feeling good no matter what aren’t out of reach.

Approaching women is one of those things that requires a positive attitude. Why? Because it involves a lot of rejection. In fact, you’ll likely get rejected more than you succeed.
The key here is to find a way to reframe rejection into a positive thing.
Say a girl tells you that you’re too short for her, or that she doesn’t date guys who have long hair. It might sting, but you can look at this in two ways.
You can respond by living in your own reality, and not letting her criticism affect you.
Positive thinking people take a situation like this and view it as experience or knowledge they can use in their next approach.

A negative thinker will likely take a rejection really hard, and actually believe that they need to change something about their appearance in order to get laid. This is rarely ever true. It’s a thought process.
At first, it might seem weird to consciously choose to think positive. We’re so used to having negative thoughts that it becomes our baseline, and thinking positive feels uncomfortable.
Just stick with it, and invent a scenario in which a negative situation, is actually a positive one.
Before long you’ll be incapable of having negative thoughts. It just won’t happen anymore because you’ve formed new habits.

How To Think Positive: Practice

A positive attitude starts in the unconscious part of the mind. It’s the part that we’re unaware of, that responds more to images, symbols and concepts, rather than logic. It’s the emotional part of us.

Negativity in childhood, or a traumatic experience can send this part of our brain into a habituated negative thinking pattern, which then affects our conscious minds.
The good news is that you have the power to change the unconscious.
There are a lot of ways to change your thinking patterns so that they’re more aligned with a positive mindset, but these are by far the best ways to go about it:

Focusing on these things, and reinforcing the idea that life is good, will eventually make it your default mindset. The idea is to form new neural pathways in the brain so that positivity dominates negativity.
Meditation can take some practice, but after a while, you’ll be able to enter that positive thinking space any time you want.
Don’t expect yourself to be a Zen master overnight, but stick with it and you’ll find a deep inner-peace.
The same goes for exercise. Exercise helps with a positive self-image and, as most guys know, raises testosterone. When it comes to living your best life, exercise is kind of a win-win.

So, once you’ve taught yourself how to think positive, it’s essential that you keep those positive pathways strong. This really just boils down to surrounding yourself with positivity.
Read positive quotes, inspiring stories and only keep people in your social circle who are a good influence. If someone does nothing except bring you down, you might want to limit contact with them.

If it helps, imagine positive thoughts as habits. The more you do it, and the more you practice it, the better you’ll be at it.
However, we live in a world full of adversity, so it can be easy to fall back into negative thought processes.
By staying true to yourself and doing the things you enjoy, you create a good environment for yourself in which to thrive.
This will help you keep those positive thinking patterns strong, and ensure that you avoid negative ones.
Generally, it takes 30 days to form a new habit, so, for the next month, do something that makes you think positive every single day.
At the end of the month, you’ll have an entirely new way of thinking about the world.

The worst part about negative thoughts is that they sneak up on us. We get so accustomed to thinking in a negative way that we start to think it’s normal. If we’re not careful, they can pollute our well-being.
Negative people find a way to take any situation and make it into a negative one. However, there are a lot of common negative thoughts to be aware of. Common ones include:

If you start to feel these things, it might be time to look into some positive thinking books, or some lifestyle changes to turn your mindset around. Find positive quotes and repeat them as often as possible.

Ignore the voice in your head that tells you to only look at the crappy parts of your day-to-day life. It takes time, but the results of being a positive person will make your life better in pretty much every way.

The Power Of Positive Thinking

Whether you cultivate better thinking patterns through meditation or through positive affirmations, the basic principle to being positive is understanding that it comes from within you.
Nothing about your external life situation should affect your thinking patterns.
Whether you’re making a ton of money and killing it with women, or you’re broke and striking out occasionally, you should still be able to think positive.
The point is that being happy comes from you, not your circumstances. A lot of people think that being super wealthy and being surrounded by tons of women will make them happy. This just isn’t true.

There are plenty of people who have that stuff who are miserable. On the contrary, there are plenty of people who don’t have a pot to piss in, but wake up every day with a smile on their face.
The awareness of the fact that happiness comes from within is a very empowering thought, because it means that you can take control, regardless of what’s going on in your life.
So, start making some lifestyle changes, get into positive books and activities, and just take life as it comes to you.
It may take some time, but before you know it, you’ll be thinking differently about a lot of things.
This in turn, will better equip you to deal with the hard stuff you encounter in life. With a little practice and optimism, you’ll ascend into the unstoppable force that you really are.

Playing Hard To Get: A Tried And True Method For Attraction
How To Live In The Moment And Find Happiness