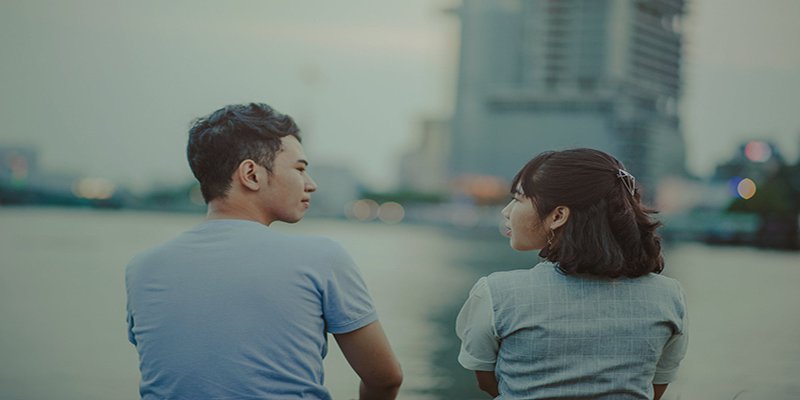 The Right (And Wrong) Things To Talk About With A Girl

The key to getting a girl to like you lies in how well you can hold up a conversation.
At least, that’s the case in the very beginning, which, happens to be the most important part of the interaction.
If you can’t make it past the first few minutes of talking, how can you expect to get a girl to date you?
The truth is not that many guys know how to talk to girls because they don’t understand them.
They think they do, but what they’re really doing is projecting their own wants or needs onto a girl, and assuming that the girl will respond in a positive way.
In reality, girls respond to very different things than guys. When it comes to topics to talk about with a girl, you may have to broaden your horizons a bit.
Talking to women isn’t difficult per se, it’s just different than talking to your friends or your family members.

Conversation topics are a big part of the picture, but the way you carry yourself in conversation is just as important.
Confidence and being able to think on your feet are crucial when you’re talking to a woman. You have to be able to blend both an interesting perspective with genuineness.
This is basically the recipe for a good conversation. Girls are great at sniffing out incongruity, or falseness, so being interesting isn’t enough.
You have to mean what you say, and make sure that thoughts and feelings are aligned with who you are.

How To Talk To Girls: Develop The Right Mindset

There is no step-by-step process for talking to girls and anyone who tells you there is, is full of it. It’s more of a mentality.
It’s a state-of-mind in which you are confident and focused but also relaxed, and able to shift from one topic to another.

There are some topics to discuss with a girl if you want the interaction to go a certain way, but you have to bring them up casually, and can’t just go right for it.
This will make you seem too eager, and will probably scare her away.
There are a lot of things you can talk about with a girl, and the things you bring up will shape her initial view of you, which is crucial for whatever you’re hoping for in the interaction.
Some topics you might think about discussing are:

The key is to make it seem like these things are coming up casually, and not like you’re intentionally bringing them up in order to get something out of her.
It sounds a lot harder than it really is, but with a little practice, you’ll be able to steer conversations any way you like.

Talking To Women Should Be Fun

If you think that all women want to talk about is shoes, clothing, and make-up, you’re sorely mistaken. Just because you’re a guy and she’s a girl doesn’t mean you won’t have some overlapping interests.
Probe a little in the beginning, see what she’s into. You might find she’s more unique than you think.

Girls don’t always reflect their interests with their outward appearance. You might come across a ten who can’t get enough of Dr. Who, or a nine who’s a professional guitar player.
Women are full of surprises, but if you go into the conversation assuming it’ll be boring, they won’t share them with you.
Assume that all women have something incredible about them. Ask questions, try and get her to tell you who she really is. Once she starts talking, you won’t be able to get her to stop.
Everyone likes talking about themselves, and if you can get her started, you’ll be in good shape for the rest of the night.

Never enter an interaction with pre-planned topics. You aren’t a talk show host and it isn’t an interview.
The more you try to come up with things ahead of time to talk about, the worse off you’ll be. It’s because it makes you sound fake, like the whole thing is being taped.

Let topics come up as the interaction progresses, and then try to get some mileage out of them. If a girl has a tattoo, ask about it.
Toss in a compliment or two, but keep it to a minimum. Too many compliments will make her think you’re desperate.

If you allow topics to arise on their own, the conversation will appear a lot more natural. You may not realize it, but the dating scene is so bad for women right now, that a good, honest conversation might be all you need to spark some attraction.

Showing up to a date or to a bar with a checklist of things you want to talk about isn’t going to help you. It’s just going to make you seem socially weird and decontextualized.
Be in the moment. Talk about things that are happening around you or something that happened that day. This is the best strategy.

Your Conversation Topics Should Be Sparking Emotion

Emotional stimulation in conversation is almost guaranteed to turn a girl on.
Most guys walk right up to women and try to sleep with them, but very few try to interest or challenge them emotionally or intellectually. By definition, doing this will set you way ahead of the pack.

Girl Talk: Sometimes Listening Is The Best Way To Learn

Hang out with girls, even if you aren’t trying to sleep with them. Being around women, or having lots of female friends, gives you perspective without the subtext of sex.
Female friends will not only tell you what they like, but they’ll also tell you what guys have done wrong.

It’s very valuable information if you’re trying to get a feel for how to talk to women, mainly because a girl you’re on a date with or hitting on at a bar, isn’t going to just come out and tell you these things.
However, a platonic relationship with a girl can teach you a lot.
When a girl sees you as a friend she will talk about her love life—the good parts, the bad parts and the parts that are just okay. If you’re smart you’ll listen and apply these things to your own dating life.
Remember, girls are not guys, and they respond differently to things than we do.
Don’t assume that hanging with a girl who has no interest in you sexually is a waste of time. It isn’t. You’ll learn things about women, and learn to respect them more.
No guy can consistently get women attracted to him without respecting women first.
The guys that do the best in conversation tend to have strong relationships with women outside of just dating.
So, open your ears, pay attention, and take what you learn with you on your next night out.
The more you understand them, the easier of a time you’ll have when you’re talking to women.

What Does Friends With Benefits Mean? The Definitive Guide
Place To Meet Women: Everywhere And Anywhere