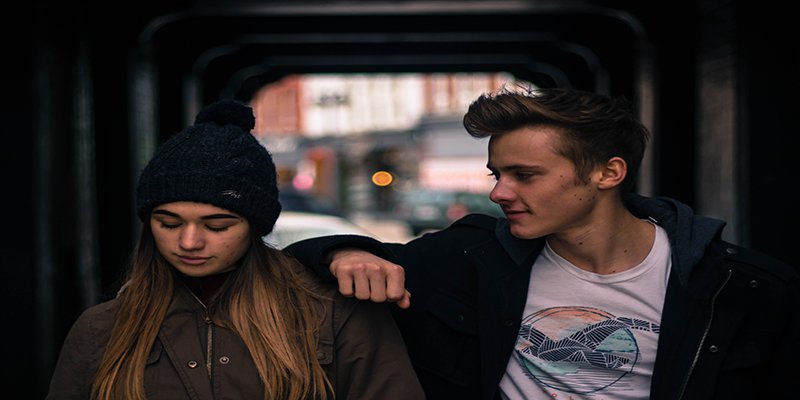 Ditch The Casual Hook-Ups: How To Get A Girlfriend

Let’s say you’re the kind of guy who knows how to attract a girl, but at the moment, you’re only hooking up with a girl on a regular basis. So far it’s pretty carefree, and the sex is good.
Things are so good with her, that you start to see her a little bit more than just a girl who comes over once in a while for a little bit of fun.
You start to view her as the kind of girl you could see dating, watching Stranger Things with, or even posting pictures of on your Instagram account with the hastag #bae.
Yeah, you’re starting to wonder less about your next night out and your day to day thoughts sound more like: how can I get a girlfriend? This is a very nuanced specific part of game, and is a long way from just knowing how to approach girls.
It’s a perfectly natural thing to feel after you’ve been seeing a girl for a while, but any guy who’s been in the game for an extended period of time knows you can’t just bring something like that up in any way you want.
Telling a girl you’re only seeing casually that you want to make her your girlfriend is a delicate process. If it’s not handled right, you might scare her off. If you think it’s time to ditch the casual hook-up, keep reading. Here’s how to get a girlfriend.

Get her to like you, but take it slow

Even if you’ve made up your mind, you can’t just come right out and tell her how you feel. She probably isn’t expecting it, and if you move in too quickly, you’ll scare her off. The last thing you want to do is obsess over how to make a girl like you or how to impress a girl.
Start small. Ask her to stay the night after she comes over, and then the next morning ask if she wants to go get food.

The idea is to start treating her like your girlfriend before she actually is. It’s a way to give her an opportunity to see how it feels to be in that role.
Naturally, you’re going to a do good job because chances are you’ve done this before and know how to get a girl to like you, at the very least. If it helps, these are the key things you want to project:

All you have to do is just slowly start to treat her differently, and she’ll get the hint.

Show Her You Already Know How To Get A Girlfriend

If she’s been sleeping with you for an extended period of time, there’s a pretty damn good chance you’re doing something to please her.
Maybe you know what it is, and maybe you don’t, but the point is that, for women, a man with experience both sexually and emotionally, is a huge part of any relationship.
Related: 3 Steps To Turn Friends With Benefits Into A Relationship
You’re not going to be able to sustain a relationship unless you’re doing the right thing in bed or just walking around the mall together.
So, if you’re trying to get a girl to see you as boyfriend material, the worst thing you can do is try to fix something that isn’t broken.

If the sex is good, don’t think that by changing it or trying to something new that you’ll push her over the edge into wanting to date you. Stick to what you know is working, and just keep doing it.

Introduce Her To Your Friends

Letting her meet your friends is a very big deal. It’s a very subtle way of saying that you’re allowing her into another part of your life.
Your friends are the people you’re closest to, they know you best and by allowing her to meet them, you’re also allowing her to see who you really are.
You can’t fake who you are in front of your friends, and if you’re all hanging out together, she’s going to get a side of you she’s never seen.
Don’t worry about trying to please both your friends and your girl. Just be yourself. If you act natural and don’t seem nervous about it, everyone will be more relaxed.

If your friends get along with your girl, it’s a very good sign. It means that, at some point, you can all hang out together.
If she likes you, she’ll do everything she can do get along with your crew, so watch carefully.
If she’s trying to get on their good side, you can take it as a sign that you made the right choice by bringing her to your buddy’s weekly poker game.
Again, this is the kind of dynamic that people develop in relationships. If you’re dating a girl seriously, you have to be able to bring her around your friends.

How To Impress A Girl: It’s Not What You Think

If the extent of your interactions with this girl have been sexual, then it’s time to suggest a date. Impress her, and show her what else you’re capable of. I’m not talking about a quick trip to get Chinese food. I’m talking about a full-on date:

The point is that you take her to do something that isn’t necessarily tied to having sex to show her that you can be equally as fun to be with, no matter what the two of you do together. Your focus shouldn’t be only on trying to impress her, because that will come off as superficial, but you should want her to look at you a little differently.

Your goal is to show her that you enjoy spending time with her in an environment where your clothes actually stay on.
Sex may be a big factor, but most people in relationships are not constantly jumping each other’s bones.
You’ll have to learn to spend time with each other in a deeper way. Don’t take anything for granted, either. Essentially you’re trying to seduce her all over again, but from a different, more cerebral angle.

Find A Way To Connect

Right now she sees you as someone who can please her sexually, but maybe not one who can do so emotionally.
You can’t assume that the sexual comfort you’ve built will somehow translate to the dating realm.
You aren’t necessarily starting from scratch, but it’s not a done deal yet. Game her as you would any new girl. Let yourself get a little nervous, and put in the effort.

After you’ve done all of the above, it’s finally time to tell her you want to make her your girlfriend. Do it confidently, smile while you tell her how you feel, and don’t seem needy about it.
The more nonchalant you are when you ask her to be exclusive the better.
The best mindset to have is one where you treat the relationship talk like a natural suggestion rather than a request.

If you make a big production out of it, she’ll get uncomfortable and won’t be so quick to say yes.
Commitment is inherently scary, especially nowadays, so there’s no reason to make the process of getting committed uncomfortable.
If you like each other, it should be fun, so make sure she feels that way.

Now, Go For It

If you’ve done everything else right, and she is becoming more of a person in your life instead of a hook-up, she may even see it coming.
In general, you want to avoid being predictable, but for something like asking a girl to date you seriously, it’s better if she has a little bit of a head’s up.
In a lot of ways, starting off as friends with benefits and evolving into a relationship can make the bond stronger; there’s no right or wrong method for how to get a girlfriend. At the end of the day, you’ll have to improvise and see what works for you.
The development of it is definitely out of order, but once she agrees to be your girlfriend, you’ll find that you’ve already developed a pretty close connection.
So take your time, and when the moment is right, go for it and make her yours.

Ditching Digital Dating: Why Approaching In Person Wins Every Time
The Art Of Conversation: How To Talk To Girls