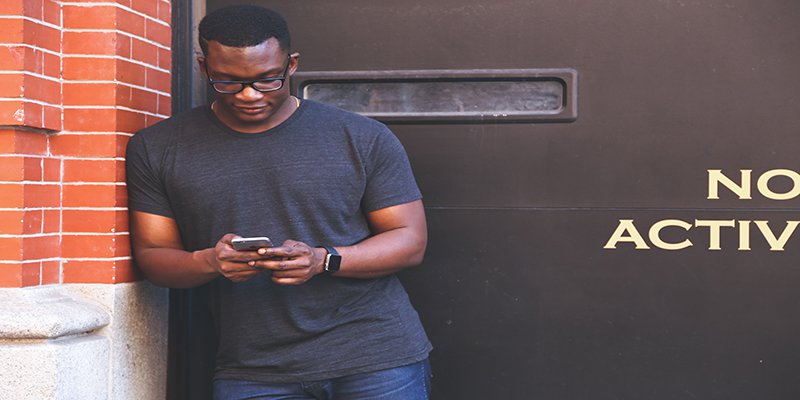 Crash Course: How To Text A Girl

As much as some of us wouldn’t like to admit it, texting is a huge part of game. Knowing what to text a girl is almost as important as knowing what to say to her in person. Why? Because texting has become almost as common as speaking.
By knowing how to send the kinds of text messages to make her want you, you can evoke almost the same feelings in her as you might be able to do at a bar or a club.
Think of it this way; texting is the new way of sending romantic letters. Granted, you may want to calibrate the romance based on how well you know the girl, but texting a girl the right way is sure to make her hold her iPhone up to her chest and say, “Awwww.”

The Basics Of Texting A Girl

Of course, there are different rules about what to text a girl you just met, and what to text a girl that you’ve been seeing for a while.
Either way, the amount, the frequency and content of your texts should always be taken into consideration. Too much of any one thing, and you’ll scare her off and make her think that you’re a creep.

It’s all too tempting to text a girl you like something over the top, poetic and dramatic, but it’s one of the areas—like most others in game—where you have to exercise some discipline, play it cool, and think things over before you do them.

How To Start Texting A Girl: Frequency

One of the most important things about texting a girl is the frequency in which you do it. Too much, and you’ll scare her off. Too little and she’ll think you forgot about her.
However, sometimes, when you don’t text a girl for long enough, she’ll text you out of the blue, especially if your initial, in-person interaction with her was strong enough.

One of the biggest reasons frequency is most important when it comes to texting a girl, is because the amount that you text a girl can say a lot about your personality.
Any guy that texts a girl all day is essentially communicating that he has nothing else going on. It isn’t the most attractive thing for a girl to pick up on.
In some cases where a guy is hitting her up constantly, the girl may welcome the attention, but over time realize that she has no intention of actually sleeping with the person giving it to her.
It doesn’t seem like it can happen, but you can really hurt a girl’s perception of you by texting her too much.
In general, it’s better to text less than to text more. Let her make the first move. After a few days, you shouldn’t be surprised to look down at your phone and see that beautiful little icon with her name next to it that says, “Hey!”

The content of what you text a girl is the second most important thing. It doesn’t matter if you’re wondering what to text a girl you just met, or one that you’ve slept with a few times.
There are really only four things to remember:

It goes without saying that holding back on unsolicited pics is pretty essential when it comes to how to get a girl to like you. Sending a pic is sort of vain and a little try-hard.

It may work sometimes, but overall, it’s usually not a good look. You should also always err on the side of not being creepy. This essentially means staying away from any kind of sexual or suggestive messages.
Look, women don’t get turned on the same way men do. We’d all love for a girl to send us some nudes or some raunchy messages, but it doesn’t work that way for women.
She’s going to be more attracted to your charm, your conversation skills and your ability to show her that you can keep yourself under control. Lastly, try to avoid overtly flirting.
It can be pushy and unless you’re particularly good with words, a lot can get lost in translation. Charm, humor and a carefree attitude are enough to get her to want to see you again.

Knowing The Signs: How To Get A Girl To Like You Over Text

Sometimes, knowing what certain kinds of texts mean (beneath their literal meaning) can do you a world of good and save you a lot of time when you start texting a girl.
Most of the time one or two word text messages generally convey disinterest, even if she keeps sending them.

Too many guys forget that their time and their attention is valuable, and are willing to keep firing long text messages at a girl, even if she isn’t quite returning the favor.

If she isn’t writing as much as you, or ignores one of your jokes, you want to consider scaling back the amount that you’re writing.
A good strategy, believe it or not, is to abruptly stop sending messages. I know it sounds a little manipulative, but at the very least it’s one way to know if she still wants to talk.

Let a few hours go by without sending anything. If she writes something back, it means she’s wondering where you went.
It doesn’t necessarily mean that she’s ready to jump into bed with you, but she’s at least interested enough to want to keep chatting.

What To Text A Girl To Set Up A Date

Setting up a date via text is one of the most complicated parts of talking to girls, but it really doesn’t have to be. As a general rule, you want to avoid making a big production out of it.
Don’t even mention the word date. Dress it up some other way:

The less of a production you make the date, the more willing she’ll be to actually go. You’re not being lazy or uncreative. You’re just not trying to freak her out with some kind of long invitation to go get a boring dinner somewhere.
Keep it simple, keep it carefree: she’ll have no trouble saying yes.

When you’re texting a girl, the best thing to keep in mind is to just have fun. Count to ten before you send each message.
If you still don’t know what to say, just write something later. You shouldn’t feel like you’re thinking too much.
You should be effectively communicating your personality by using evocative, cocky-funny messages. It sounds crazy, but working on your writing skills can actually help you a lot with your texting.

Learning how to write well and convey certain emotions with words will go a long way with your text messages. If you’re thinking too much, it can only hurt you.
The texts will come out sounding mechanical, strange, and won’t turn her on the way you want them to.
Above all else, the golden rule for texting is to be having as much fun with her as you would in person. If you can get her feeling good with some cleverly worded messages, you won’t even have to ask her out.
She’ll be dying to hang with you, just to see what else you have up your sleeve.

Why You Must Carve Your Own Path As A Man And Think For Yourself
How To Get A Girl To Like You: Do Less