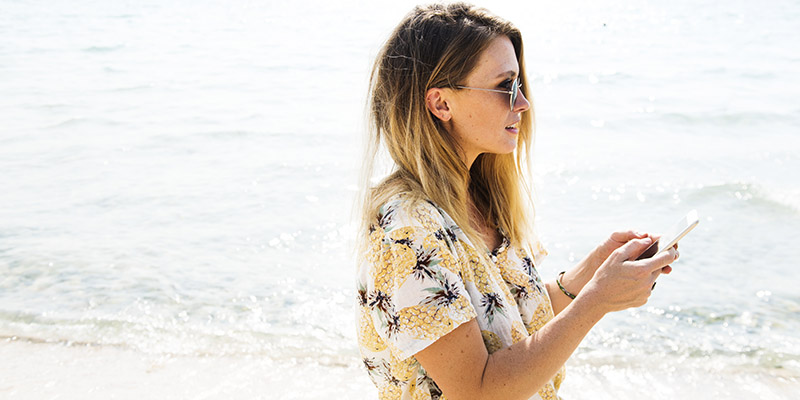 A Beginner’s Guide To Mastering The Art Of Sexting

Generally speaking, you can still seduce a girl without resorting to sending dirty, suggestive or overtly sexual texts.
Some might even argue that it’s too risky and that sending a sexual text at the wrong time could potentially scare her off. There’s some truth to this.
Coming on too strong with a vivid description of what you’d like to do once you get her alone is the verbal equivalent of a dick pic, and no one wants one of those.
For the most part, you don’t want to be the one initiating a flurry of sexts. You certainly can, but just know there’s a risk involved.
But what do you do if she starts it? If you’re texting a girl and she starts describing in detail what she wants from you when the big moment finally comes, how should you respond?
It’s a tough spot to be in, and it’s just as easy to mess things up as if you started it.
The key is knowing how to respond so that it seems like you’ve done this sort of thing with other girls and are comfortable with your own sexual abilities.
If she senses at any moment that you’re faking it, she’ll extrapolate that to your actual sexual experience, and wonder whether or not sleeping with you is worth it.
Sometimes sexting functions as exactly that: a way to see how comfortable you are when sex comes up.
It’s one more way girls can screen guys to see if they’re the right material for them.
Because sex is such a large emotional and physical investment for girls, they find ways of testing the guys they do it with long before either party even unbuttons their jeans.
Most of the time, these little methods of screening us guys are pretty accurate.
If a guy can’t hold his own texting something dirty it’s pretty clear that he won’t be comfortable enough to please the girls he’s chatting with.
If you change the subject or try to avoid responding by being sarcastic or funny, you may not totally scare her away, but you’ll raise questions in her mind about what sleeping with you will actually be like.
The key is to stay congruent while also keeping up with her.
Congruence just means only saying things or responding in a way that feels natural to you.
If you text something that you’ve never said before, something as minimal as your wording could throw her off and lessen her attraction to you.
Keep it simple, but also don’t be afraid to be detailed when the topic comes up. You want to sound as if you’ve done this before, even if you haven’t.
It even helps to lean a little toward the side of being blasé about the whole thing. Be interested and enthusiastic with your wording, but don’t go over the top.
The last thing a girl wants is to think that a guy she’s about to sleep with can’t control himself, and too much too soon in a text will almost always convey that kind of attitude.
Be cool about it, and take it slow at first.
Keeping up with her is also important. You don’t want to be in a situation where the girl you’re texting is more aggressive or evocative with her language than you are.
It’s not a competition, but if she gets the impression that she’s more adventurous than you are sexually, and that you might even be a little prude, it’s going to be really hard to convince her otherwise when the time finally comes.
Most women want a guy to take charge and feeling like she’s steering the ship while you occasionally chime in won’t do it for her.
Every few volleys take control of the conversation and suggest something original that she isn’t expecting.
As long as it’s not something insane, it’ll keep her interested and curious about what the actual night will really be like.
Remember, sexting is essentially an audition for actual sex, and you need to be focused on making sure she knows that you aren’t going to be weird or awful at it.
In some ways, it’s unfortunate that girls use things like texting to screen guys, but if you put yourself in their shoes, you won’t think it’s all that weird.
Think about being a girl who every guy wants to sleep with. Just by the sheer odds of it, they aren’t all going to be normal or good at sex.
Some might be smooth talkers, but when it comes to the bedroom are as clueless as a sailor with no compass. It sucks to admit, but for some guys, it’s the truth.
Learning how to send good, evocative sexual texts can actually boost her attraction for you in between dates, so that when the time actually comes to hang out again, she’s essentially already made up her mind.
Imagine showing up to a date, knowing that you’ve already built up enough sexual tension that you start groping each other by the second drink?
If she’s not sure about you, that’s not going to happen, but if you can create some attraction via text, you’ll be in a very good spot.
Also, let’s not forget. A lot of girls just like texting. They get bored like anyone else, and sometimes chatting with a new person keeps them occupied.
You don’t have to be there at their beck and call to entertain them, but when you do decide to chat for a bit, it pays to know how to turn her on, or even just make her smile.
Don’t overthink it, but always pay attention to what you’re saying and try to gauge the impact it’ll have on the girl you’re saying it to.
As always, take each experience as a way to learn.
Keep improving, and then what was once a careful conversation about what you’d like to do to each other will eventually become as natural as the act itself.

Want to learn more? Then check out this article from our friend, Chris Calo at Way Too Social, and learn how to craft the perfect text to the girl you really like.

Is She Into You Or Just A Tease? Here’s How To Find Out
Playing Hard To Get: Why Turning Her Down Will Make Her Want You More