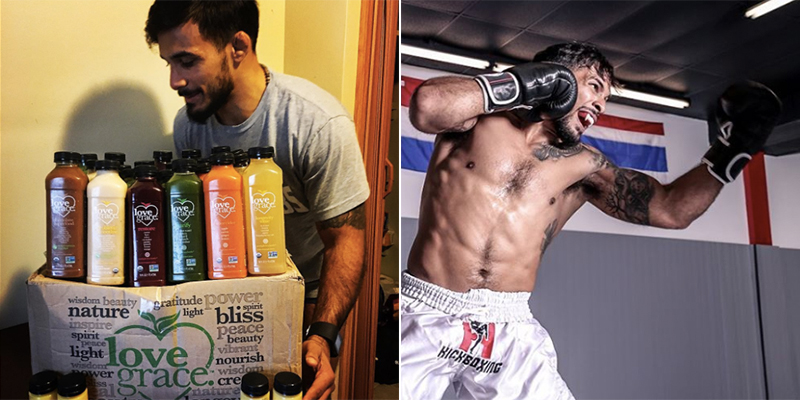 How UFC Fighter Dennis Bermudez Took His Talents To The Kitchen

There’s something about cooking that unites people, it’s really amazing.
Whether it’s people watching people eat, create culinary masterpieces, or just the social aspect of the kitchen, food has managed to bring together everyone with an interest in eating.
One aspect of the culinary landscape that has been relatively untouched can be found in the very personable Dennis Bermudez and his charismatic vlog-styled cooking show on YouTube.

If you don’t know who Bermudez is, he’s one of the most exhilarating athletes in the lightweight division in the UFC. His aggressive style has captivated and allowed him to create quite a name for himself in the organization.
“The Menace” is scheduled to fight “The Korean Zombie” Chan Sung Jung this Saturday in Houston in what’s shaping up to be the most electric sports weekend this year.
However more than his fighting excellence, Dennis Bermudez has a charismatic quality that captures audiences both on and off the octagon.
His YouTube channel, Menace Tube, shows a glimpse into the daily grind of Bermudez and it doesn’t disappoint.

The highlight of his channel, “Cooking with the Menace” ranges from various recipes, pre-fight meals, and a whole lot of personal charm.
What started off as a one off joke spun into a pretty dedicated series. Bermudez in conversation with Yahoo Sports notes,

“I was messing around and did it and somehow, some of the members of the UFC social team saw it and they called me and said, ‘That was some of the funniest stuff we’ve ever seen, they told me to do it again.”

He’s even brought on his personal nutritionist and former world boxing champion Chris Algeri to casually discuss the essential part of every fighter’s diet – smoothies.
The surprising amount of positive reception to Bermudez’s style of cooking show is indicative of a changing cultural trend towards more human representation of the kitchen rather than the very crafted and presented culinary shows on broadcast.
As a personal fan of all things food, seeing a look into the daily life of a UFC fighter outside the ring is pretty interesting.
If anything, if Bermudez ever decides to leave the ring, hopefully Vice has a place somewhere right next to Action Bronson with a pot and pan in tow.

By The Numbers: 6 Eye-Popping Stats About Super Bowl LI
Why Jackie Chan Being Reunited With His Stunt Team Is So Inspiring