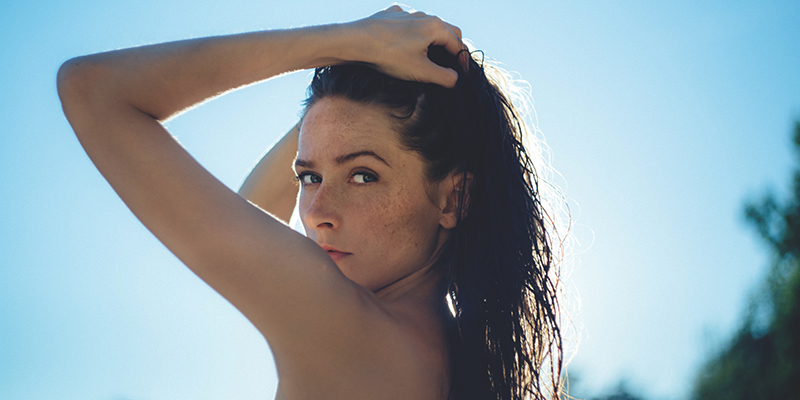 Study Shows Sending Nudes Is More Common Than You Think

Although we may be in an age of sexual exploration and liberty, it still feels somewhat shameful to want to send nudes.
The fear of being labeled a pervert is always looming, but according to this study that surveyed 2,000 Europeans and Americans to see how often they send nude photos, it’s actually more common than you think.
The study also went into detail about which parts of a person’s body they’re more comfortable showing off, and how that relates to their sex life.
Off the bat, a common misconception is that sexting is strictly for the millennials and that’s just not the case.
They definitely engage more frequently — clocking in at 40 percent for American men between the ages of 18 and 24 and 36 percent of American women — it’s not limited to them.

Between 26 and 27 percent of American adults 45 years or older and 20 to 21 percent of Europeans in this age group have been emboldened enough to send someone a sexual photo at some point in their life.

Just a hair under ten percent less than the age group twenty years younger than them.

So what are we taking pictures of?

When it comes to nudes, what’s clear is that we do not want our identity known.

Less than a quarter of those who sent sexual photos to a potential suitor or significant other showed their faces in the photo.
Which makes sense when you think about the leaked nudes and potential embarrassment nudes can bring.

Breasts are the leading photo subject for nudes, obviously led by women with 43 percent of European women and over half of American women sent nudes revealing their chest.

Men, going to what they know, reveal their genitals more.

What else is interesting about the study is the nature of the relationship between the two parties of the nude exchange.

The majority of the time that nudes are sent it’s between someone they at least remotely know.
When it’s someone that was or is potentially a one night stand the chances of sending a nude is the lowest with 14% of men and a conservative 6% for women.
When it’s a long-term spouse it’s 27% percent for men and 33% for women.

So how does sexting translate to the bedroom?

The study also asked how sexting affected the amount of pleasure received in the bedroom and found that those who sexted quite frequently had a higher likelihood of feeling satisfied with their sex life.

61 percent said they felt “very satisfied” with their sex life.

So not only shouldn’t you feel ashamed, but sending nudes might just be the way to enhance your sex life.

When it comes to sending nudes, however, it appears that women are receiving them more frequently and without even asking.

You don’t want to be that guy just showing off what your working with, not only because it’s disrespectful, but because it is considered a crime under the Malicious Communications Act.

When having received nudes most men save them at 49% and when it comes to asking people to delete what was sent, women are at 30%.

One can only hope that men are honoring that request despite the stat difference.

At the end of the day, it all comes down to feeling comfortable in your own skin.

Respondents who sent nudes more frequently reported feeling more comfortable with their sex life than those who sent them less often.

Send nudes, don’t send nudes, it’s up to you and the agreement you have made with you partner.

When you put the work into making sure you look good, it’s understandable to want to flaunt it.
But make sure the other person wants to see it.

Study Shows Too Many Cups Of Coffee May Be Dangerous