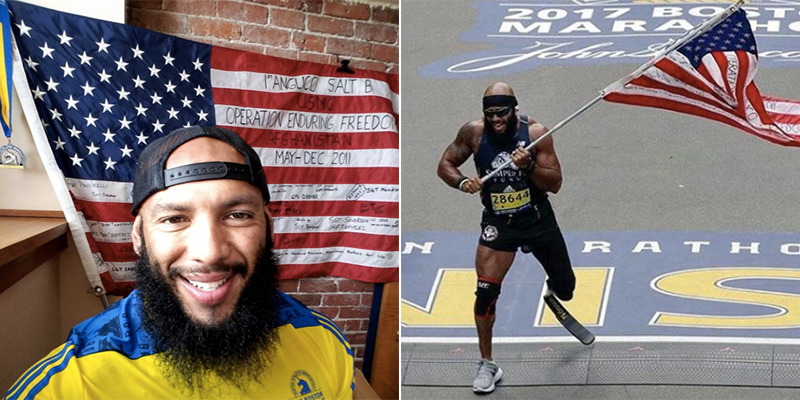 The Boston Marathon on Patriots’ Day is one of the most, well, patriotic days of the year in New England. While not a holiday in most of the country, in Boston Patriots’ Day celebrates the Battles of Lexington and Concord during the Revolutionary War.
Patriots’ Day in Boston also accompanies the Boston Marathon and the annual 11 am Red Sox game, with the whole city coming together to celebrate their city and the country. It comes as no surprise that the Marathon is the scene of many a display of Patriotism, especially after the 2013 bombings.
So when former Staff Sgt. Jose Luis Sanchez ran across the finish line yesterday holding up the American flag, no one should’ve been overly surprised. In 2011, Sanchez lost his leg to an improvised explosive device in Afghanistan, but that hasn’t stopped him running for the Stars and Stripes.

According to the Boston Globe, Sanchez ran as part of a group that helps veterans deal with assimilating to home life and recovering from PTSD,

“Sanchez competed as part of Team Semper Fi, which exists to help service members who are dealing with life-changing injuries, post-traumatic stress or critical illness. Sanchez, who is from San Antonio, Texas, uses a ‘blade runner’ style prosthetic, and completed the marathon in 5 hours, 33 minutes and 49 seconds.”

This isn’t even Sanchez’s first time doing the marathon, he was also involved last year. That he completed the 26.2 mile Boston marathon in about 5 and a half hours is ridiculously impressive, regardless of the circumstances.
That’s a hell of a time no matter who you are!
Further, the Semper Fi Fund is a pretty awesome organization dedicated to helping our veterans. Their mission, per their website,

“The Semper Fi Fund provides immediate financial assistance and lifetime support to post 9/11 wounded, critically ill and injured members of all branches of the U.S. Armed Forces, and their families, ensuring that they have the resources they need during their recovery and transition back to their communities. We work to ensure that no one is left behind.”

You can see more here.

We at TSM want to thank and honor Staff Sgt. Jose Luis Sanchez for his service and his valiant courage defending America.