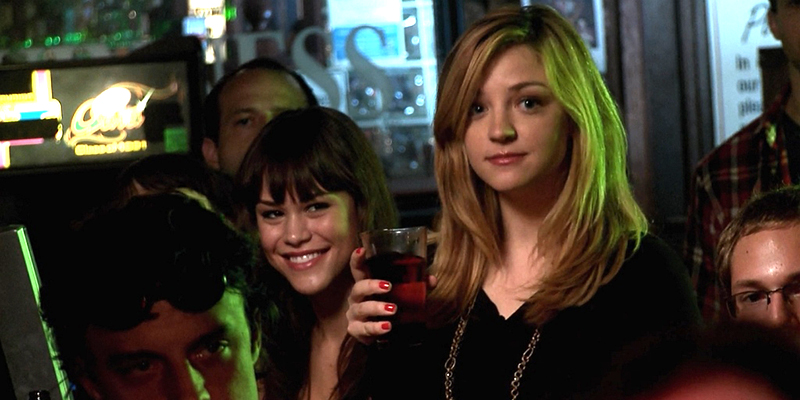 7 Signs She’s Actually Picking YOU Up At The Bar

The amount of blogs, articles, and columns out there dedicated to helping men pick up women in a bar is staggering compared to advice on the same topic geared towards women.
Is that to mean that women never pick up men in bars?
Nope. Not even close.
Women initiate flirting with men in bars quite often, but since the topic is rarely broadcasted, most men don’t realize it’s happening when a gorgeous girl is being flirty in a bar.
Maybe women used to prefer to be subtle, or maybe women were taught for too long that it’s better to be pursued. Whatever the case, in the year 2015, the rules to wait for a man to talk to a woman no longer apply.
So, in this new and exciting generation where women are bold and daring in the dating arena, how are you going to be able to tell if you’re being hit on in a bar or if the girl next to you is simply being nice?
Look at this checklist of scenarios. If the girl at the bar falls under any of the following categories, she’s probably interested in more than just a night out of dancing with her girlfriends (because that’s usually the excuse women use when they’d rather steer clear of a guy attempting to successfully pull off a pick up).

Scenario #1: She asks for your opinion to settle a debate between her and a friend

You’re standing by the bar with your friend Matt. Just as your friend Matt turns around to call the bartender’s attention for another round, the cute girl with curly hair and her friend (who’ve both been standing beside your group for a while) turn to pull you into their conversation and ask your opinion.
“My friend went on a date with a guy a couple of days ago and he hasn’t called her yet. Do you think he’s playing the waiting game or that he’s not interested?” the cute curly haired girl asks.
You give your honest opinion, and turn back around to continue your chat with Matt – all the while not realizing that the curly haired girl was actually hitting on you.
Not only did she enlist her friend to help her pick you up, but she made it clear as day that wants to know what you think (i.e. she wants to have a conversation with you).
If a girl initiates a conversation with you, especially with the help of a friend because that means she’s serious about getting your attention, then stay and chat with her.

As you’re at the bar top, a girl squeezes in to try and order, but before she does she turns to you pretending to be undecided about what to order and asks what you’re drinking. You tell her you’re drinking a jack and coke, so she orders the same.
If this happens to you, the bells and whistles should be going off in your head because this is a clear sign that she’s trying to tell you she’s interested.
I mean, really. At a bar she’s not sure what to order? She knows what she wants, but she’d rather have what you’re having so she has a reason to talk to you. She’s being flirty, so be sure to ask her how her drink is after she orders and then take the conversation from there.

Not typically in use anymore, but some girls still like to pull this move. As you’re waiting by yourself for a friend, a cute girl asks if she can sit and chat with you because she’s trying to get away from some guy that won’t stop hitting on her.
This damsel in distress move is used for two reasons: first, it gives her a reason to actually sit and chat for a few minutes; second, it shows her value by showing off that she’s a wanted person.

Scenario #4 She’s clearly eyeing you from across the bar

You and a few guys are out having beers, and you notice that a girl has been accidentally catching your eye every so often.
This is no accident. She’s trying to get you to notice her. Maybe she’s too shy to actually walk up to you and strike up a conversation, but she is being bold by singling you out of the crowd.
It’s your turn to be bold, and walk over to chat her up.

Scenario #5 She lightly touches your arm while “getting by”

Most people don’t exactly enjoy being touched by total strangers. When trying to get passed hoards of people, the most natural reaction is to tense up and hold your hands up and close to your chest so that you don’t touch anyone you walk by.
As you’re standing at the bar, a girl squeezes in and lightly puts her hand on your arms while saying excuse me.
She’s giving you an opening (literally) for you to allow her to get her in next to you and talk to her.

Scenario #6 She gives you a bit of a hard time

You’ve been talking to a blonde bombshell for 10 minutes by the bar, and she keeps engaging in playful banter and making little playful jabs at you.
She’s not trying to be aggressive. She’s trying to be playful and cute.
Some guys enjoy this, and others don’t. If you happen to fall into the first camp of guys, then rejoice in the fact that she’s definitely hitting on you.

Scenario #7 During your conversation she brings up a great (restaurant, bar, bakery, or any other venue) that she knows

After chatting with a petite brunette for a while, she brings up a bakery that she absolutely loves in the city.
No, she’s not trying to give you her personal Yelp recommendation. She’s actually trying to give you an opening to take her out to that spot.
If a girl name-drops a certain venue during conversation, I’d bet anything that she’d say yes if you were to ask her to meet there tomorrow night for (croissants, pizza, cocktails, or whatever).

How do you react when a girl hits on you in a bar?
Do you prefer to initiate conversation or do you prefer if a girl does?
Do you think it’s attractive for a woman to be bold and confident?

She’s Not Into You? Model Rey Fakhari Explains Why There Still Might Be Hope
7 Christmas Gifts for Her That You’d Never Think to Get