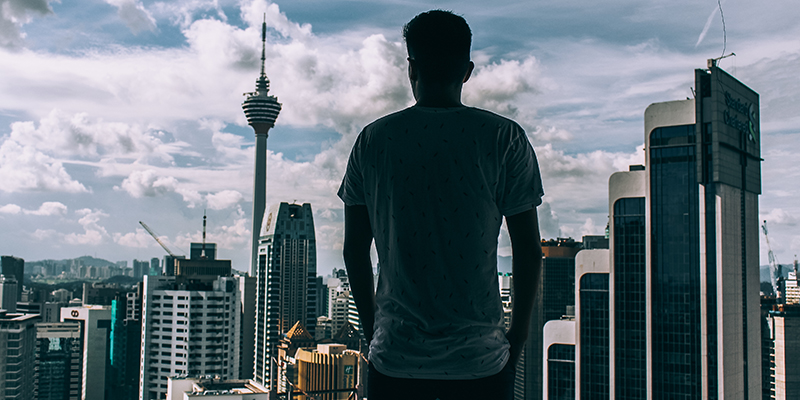 Leave Your Problems At The Door: How To Game When Life Gets You Down

Sometimes life throws you a curveball.
Things are going great, and then all of the sudden, something catastrophic happens at work, in your family or in your personal life.
In the middle of something like this, the desire to go out and be social diminishes, and the last thing a guy wants to do is try to romance a girl at a bar.
Generally, it’s way easier to pick up a girl if you’re happy and things in life are going well. But when you’re stuck in a rut, it can hurt your game severely.
Does that mean that it’s impossible to game when life outside the bar isn’t going well? No, of course not. You just have to be able to leave that stuff behind when you go out.
And above all else, you have to force yourself into having a good time.
Let’s say your week starts off with some problems at your job that you couldn’t fix and then ends with one girl that you’ve been sleeping with on the reg telling you she’s not into it anymore.
There’s no shame in admitting that you aren’t feeling like your usual seductive self, but it’s still not an excuse to stay home and sulk.
As a matter of fact, going out and socializing can make you forget these kinds of things temporarily.
Yes, your boss may still have it out for you, and you may be disappointed that the great sex you were having is no longer available, but on a Friday or a Saturday night, there isn’t much you can do to solve either of these problems.
The best place for you to be is around friends who also know how to game, and girls. Lots and lots of girls.
Our brains are wired to like all different kinds of things: fat, sugar, certain types of weather and, for men, specifically, the company of women.
Even if you don’t end up sleeping with a girl on a night out, just getting a phone number or having a good conversation is a way to battle the negative feelings that have been brewing in your mind because of the nasty turns your life has taken.
A smile from a girl or even one touching your arm because of something funny you said can, at least for a few minutes, put you in the right state of mind to keep going.
After a while game starts to be like therapy.
It’s not supposed to be stressful but is instead a way for a guy to decompress, work on a skill set and enjoy himself.
Some guys couldn’t imagine gaming after a week where their car breaks down or someone robs them, but the reality is that it’s the best place to be.
There are still rules though. If you go out and start talking about all the shitty things that happened to you, it’s not going to go well.
Imagine that it’s the best day of your life, and leave all of the negative stuff at the door. The whole point is to make yourself feel better, not dwell on the bad stuff.
Everyone knows that guy who goes to a bar, gets drunk and then complains to all the hot women that he could be sleeping with about his problems.
Don’t be that guy. See the bar as a place to go on a vacation from life.
Just because you didn’t get on a plane or go to some island, doesn’t mean you can’t approach your night with the same enthusiasm or excitement as you would for a week-long trip somewhere.
It’ll do wonders for your mental state, and it’ll increase your chances of hooking up exponentially.
Game doesn’t just have to be a way to get laid. It can be a way of reminding yourself that you have value, regardless of the shit that happens to you.
In a way, game is an analogy for life, insofar as that you only learn from your failures.
Sure it would be great if every time you walked into a bar you left with a ten, but you wouldn’t learn anything from that.
You learn from being rejected, and from retracing your steps so you don’t make the same mistakes twice.
The point is game can teach you about life, and life can teach you about game. They are such closely related parts of a guy’s day to day experience that they can help compliment one another.
When one starts to go awry, focus on the other. Consider the flip-side, maybe game isn’t treating you as well as you’d like.
You can always focus your energy and time on work or your hobbies to make yourself more interesting or more diverse as a person. Then, when you come back to it, you’ll be twice the guy you were.
The main thing to remember is that in the event that life starts bringing you down, you shouldn’t use it as an excuse to avoid a night out or stay home in your apartment moping.
Wallowing only makes things worse. The right choice is to go out and realize that you have this whole other part of your life that you can focus your energy on.
Plenty of guys start a night of gaming thinking that there’s no way they can pull off a successful approach because of how miserable they are, but once they just go ahead and do it, they realize that their problems, while still present, are not as bad as they thought.
My advice for anyone struggling is to be around people, if possible, women.
Show them how charming you are, and showcase your value in the social sphere.
Lockdown a few makeouts, get a few numbers and then, the next day, when you wake up, face your problems head-on.

A Two-Way Street: Why You Are Also To Blame For Your Break-Up
The Secret Advantage To Bad Game And How It Can Help You Attract Women