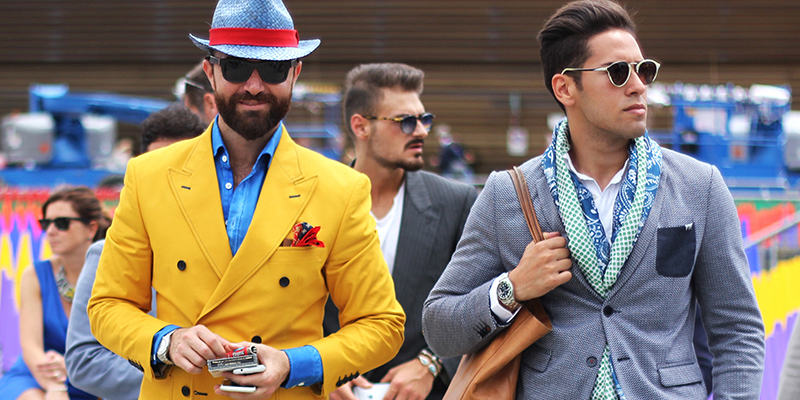 When most people hear the word, “peacocking” they think of a bunch of guys in the mid 2000’s running from bar to bar in furry hats and black nail-polish while telling girls to “keep their hands off the merchandise.”
Through purposefully outlandish clothing, an army of pick up artists led by Mystery (Erik Von Markovik) and Style (Neil Strauss) would draw attention to themselves in public places in the hopes that it would give them a leg up in seduction.
The craziest thing is that it worked like a charm. Normal guys who had decent game and put a lot of money and effort into their clothes, were getting upstaged by nerds wearing ski-goggles, top hats and feathered boas to clubs in LA.
The dumber and tackier a guy looked, the more girls he pulled and it was kind of fucking beautiful.
When The Game came out, it made the strategy of donning eye-catching garb a household term among guys in general.
Eventually, any time someone dressed well or had a cool outfit on it became known as peacocking.
Then real peacocking seemed to fade away, and if someone did do it, they just looked like a bad Mystery or Style impersonator; at that point, most girls knew what they were up to and the costumed casanovas lost their mojo.
Now, over ten years since “The Pickup Artist” aired on VH1, you hardly see guys in the community rocking wild clothing out in public and going home with tens. But why?
Why, as a community, did we abandon a tactic that not only worked for years but has its roots in the science of mating?
The answer is because most guys who attempted peacocking just flat out did it wrong or didn’t have the inner-game to pull it off.
The fact is, you can’t just throw obnoxious rings on every finger and a funny hat and expect girls to flock to you like your package is Louis Vuitton.
You have to be creative, unafraid, and willing to take one, maybe two steps out of your comfort zone.
Some might even say that the point of peacocking is not just to attract girls, but to get a guy used to being the center of attention—or in pick-up terms, the alpha male.
Here are some do’s and don’ts to kicking it old school and letting your outfit do the talking.

Do: Stick to a theme

If your outfit is crazy but doesn’t make any sense, you’ll just come off as weird and not a fun, enigmatic guy. Find a look, a person or an idea to emulate when you’re putting your ensemble together and try to keep it consistent.
Maybe you love 80’s glam metal. Look at some pictures of how guys dressed from that era and try to gain some inspiration. Don’t copy them exactly—you don’t want people to think it’s a costume—but take the things you like to put together a new look. In fact the 80’s are a pretty good place to start in general.
Clothing was tacky, bright, in your face and Tommy Lee wore makeup for fuck’s sake. That’s right, Tommy Lee. The guy from Motley Crue and from that… movie.

Intentionally dressing in a ridiculous way is the ultimate display of confidence. It demonstrates to pretty much everyone around you that you’re aware you look a little insane, but don’t give a shit. However, you have to commit.
Cover yourself head-to-toe in whatever crazy stuff you picked up at Party City, and don’t listen to the little negative voice in you that says that cowboy boots look stupid. There’s nothing worse than a guy who’s only kinda peacocking.
A funny hat that lights up on top of a regular sweater and jeans isn’t going to do much for you in the way of getting attention. The point here is, go big or go home.

Do: Be ready to handle attention

You’re a man wearing a purple tuxedo jacket, ruffled shirt, and sunglasses indoors. People are going to question you, and you have to be prepared.
Peacocking can easily be wasted if you don’t know how to respond to the conversations it starts, both good and bad.
Girls especially will come over and ask, “What’s with the outfit?” and you have to be ready to answer them in a way that’s funny and charming. You put all this crap on to get a woman’s attention, so that now that you have it, it’s your job to keep her interested.
No amount of velvet or giant belt-buckles will get you laid all on their own. Just use your clothes to get things started and then shift into another topic.
Guys will mess with you too because you’re taking the attention away from them, so be ready for the challenge.

Don’t: Make the whole conversation about your outfit

If you start talking to a girl, don’t even mention your clothes unless she does. Even at that point, you want to minimize how much it comes up in conversation.
If your outfit is enough to get her to notice you, talking about it excessively will just cheapen the effect. You should give off the vibe that you are completely comfortable in your leather biker vest and, for you, it’s nothing out of the ordinary.
This practically oozes confidence, and doesn’t make a good night of peacocking seem gimmicky or lame. If anything, it makes her want to know more about you.

Peacocking isn’t supposed to add stress to your night. If you’re shitting your pants in a constant state of worry that everyone is looking at you, take a deep breath and remind yourself that that’s the whole point.
You should train yourself to enjoy the feeling of people turning their heads when you walk into a room so that, over time, you hardly even remember that your shirt glows in the dark.
Maybe you don’t get laid every single time, but wearing crazy stuff in public is an amazing exercise in confidence and you might as well enjoy the ride.
There are some things about the last decade of game that the community could do without, but peacocking isn’t one of them.
It taps into a very base instinct in both men and women, and humans are built to recognize others who appear ornamental or unusual. Like anything, there is an art to a wild outfit but you’ll never reap the benefits unless you try.
So next time you go out, give yourself a little flare and see what happens.

Change Your Attitude: The Benefits Of Thinking Like A Winner
How To Gain Confidence And Apply It To Every Facet Of Your Life