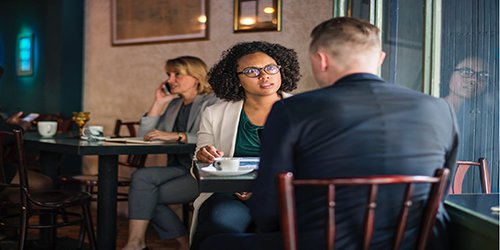 Keep Her On The Hook: How To Keep A Conversation Going With A Girl

There a lot of guys out there who are really great at approaching girls. They walk over confidently, have a really great opening line that almost always works, and from their hair to their shoes, look the part of a high-value man.

For a lot of guys this seems like the hard part. Starting the conversation feels like the biggest hurdle. They think that once they get past the first minute, it’s smooth sailing from the bar to her bedroom. Well, this is just plain wrong.

Believe it or not approaching isn’t nearly as important as knowing how to keep a conversation going with a girl. When you really think about it, it makes sense that the middle of an interaction is actually the important part.

Here’s a secret. Anyone can fake confidence for forty-five seconds or a minute. If you dress well, take care of your appearance and make eye-contact, you’re ninety percent of the way to a solid, successful approach.

However, its how to keep a conversation going with a girl, once you’ve already approached that trips most guys up. The reason is because the training wheels have to come off. You actually have to improvise, rather than just remember a canned line that makes her smile.

Improvisation, phrasing and high-energy are really the key elements to keeping a conversation alive with a girl. Without these three things, you’ll either come off as robotic, boring or maybe even a little creepy—three things that you should know are massive turnoffs the the opposite sex.

Improvisation is important because you’ll have to be able to think on your feet. Girls subconsciously throw tests at guys to see how they react, so being able to recognize those tests, and then respond them in an attractive confident fashion will go a long way.

Never ignore what a girl says just because you have a pre-planned story or a joke that you want to get out. It’s tempting to rely on canned material because it creates a sense of security. In other words, if you have a story that you told another girl that made her laugh, telling that story is easier than having to think on your feet.

The problem is context. If your material has nothing to do with the conversation at hand, it’ll just seem random and unwarranted, and you run the risk of her thinking you’re socially weird. Stay in the moment, and think of it like ping pong.

Whatever she gives you in terms of teasing you or flirting, you need to give back accordingly with a witty comeback, a joke, or some type of response that showcases your confidence and attractiveness. No matter what she says, never let her know that she’s getting to you. Most of the time, she’s just testing the waters to see what you can handle.

How To Keep A Conversation Going With A Girl

Now, the second part of improvisation, means taking control of the conversation when you can. This doesn’t mean talking about yourself the whole time, but it means keeping things even. She talks, you talk. She talks, you talk. If you let her do all the talking, it might be another test, so don’t be afraid to jump in when you feel like it’s the right time.

You might even be able to cut her off, but make you do it in a way that’s flirtatious and not rude. There’s a fine line. If you pull it off, she’ll be smiling, if you don’t she’ll let you know you messed up with her eyes, or even just tell you you’re being rude.

The next important part of how to keep a conversation going with a girl is about the way in which you say things. Phrasing can make or break you in a conversation. For example, one of the reasons girls get uncomfortable when guys bring up topics like sex, is because of the way they bring it up.

You can pretty much discuss any topic with a girl, but don’t talk to them in the way that you talk to your guy friends after a few beers. There is nothing more attractive to a girl than a guy who can broach risky subjects in a way that’s funny and calm.

The type of language you use when you’re with your guy friends will just make a girl think you’re a pig. Talk to her in a way that’s a little more sophisticated, while continuing to keep the subject matter right on the line.

Use your judgment. Talk about things that are a little edgier. Tattoos are more exciting than career goals, and a story about a near death experience is more interesting than your pet fish. Edgy is better, but just make sure you deliver the message with a little more sophistication that what you’re used to.

The last and possibly most important part of how to keep a conversation going with a girl is having a high-energy level. This doesn’t mean you have to talk really fast, and be jittery—in fact, that’s the opposite of what you should do. It’ll make her think you’re nervous.

High energy means engagement (not that kind of engagement). It means that you’re clearly and obviously focused on her and the conversation going on between the two of you. Eye-contact, spontaneity, and responding to her in a way that lets her know you’re actually listening.

If you’re out of it, tired and can’t focus, she’ll notice but she’ll interpret it as a lack of interest. Think about the last time you were in school and took a test on two hours of sleep. It probably didn’t go well, right?

Of course it didn’t. Keeping a conversation going with a girl isn’t much different. You have to be focused, and be able to make your personality big. You can’t be an elevated version of yourself if you don’t have the energy to pay attention to her.

If the thought of being ten or even twenty minutes into a conversation with a girl still scares you, just remember the following:

Talking to a girl is a lot like taking off in an airplane. The first few minutes are usually a little bumpy, and in the back of your mind you’re a little nervous, but once you’re up in the air, it seems effortless. After 10 minutes, you’ll find yourself in a rhythm, and you won’t even have to think about what you’re saying. Just keep this stuff in the back of your mind, and the rest will take care of itself.

How To Start A Conversation With A Girl: The Great Mystery