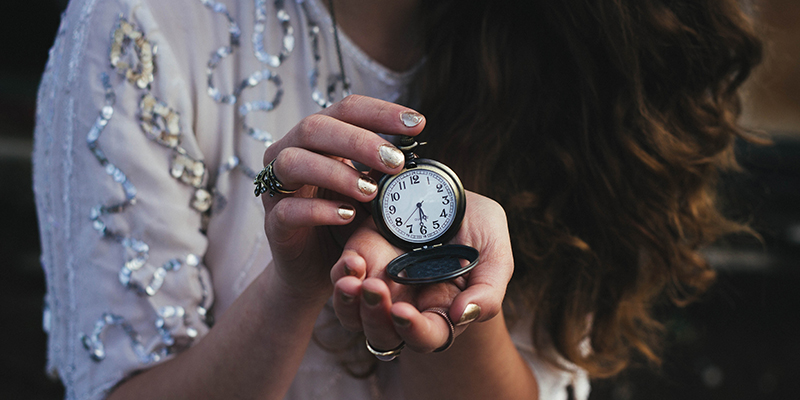 Patience Is A Virtue: Why It’s Okay To Take Your Time With Women

As guys, we tend to want to move our romantic or sexual encounters as quickly as possible.
It’s part of our nature to want to advance an interaction, rather than let it develop on its own.
It isn’t necessarily a bad thing and in some ways shows confidence and a mindset that indicates that we know what we want.
A guy who can quickly make up his mind and take action is a strong, often beneficial quality to have in almost every other area of life.
However, the big difference here is that when it comes to game, you’re dealing with actual human beings. Women typically don’t make things easy or prefer to rush when they’re talking to a guy.
In fact, the end game is what they’re least concerned about.
Women tend to be more process-oriented and concern themselves with the actual dates, conversations and the emotions that a guy makes them feel, whereas a guy, in a lot of cases, is always looking ahead to what’s next.
It may have something to do with what each sex finds attractive: for women, it tends to be the way a guy makes her feel, and for men, it’s usually some kind of visual cue that lets them know the woman is a viable romantic option.
The issue with this is that it takes longer for a woman to decide if she likes a man or not because she has other ways of making that determination that does not involve just looking him up and down.
Men can at least decide if they want to have sex with a girl within a few seconds of meeting her.
Considering it takes such a short time to decide, men immediately shift into “finish-line mode” and start pushing things ahead.
This is one of those situations where it may actually be of some benefit to go against your instincts.
Sure, if you’re on a date with a hot girl, you’re going to want to make out with her or even try to get her home, but if you move too fast, she’ll get creeped out and you’ll end up scaring her off.
The key here is to put yourself in her shoes. Imagine that her incredible body and gorgeous face are not factors for you and that you have to make your determination based on her personality or her demeanor.
As difficult as it might be, try to ignore how hot she is and behave as if her attitude is what really matters.
It may even take two or three dates before things get physical, but hotter girls usually require this kind of time and investment.
Why? Because they deal with boring, lame, weird guys all the time, and their process for weeding them out has become very intensive.
A hot girl gets approached by so many guys, that she can’t really be sure which ones are normal or interested in something else other than just sex, so she’s going to take her time figuring out which type you are.
If you try to advance things too quickly, or before she’s ready, she’ll cast you out as another guy who can’t control himself around women—a label that’s very hard to get rid of if you want to give things another shot with her.
Also, it may sound old-fashioned, but if you end up dating long-term, it actually makes things more exciting to take your time.
It leaves you both something to look forward to, rather than running the sexual gambit the first night you meet.
A relationship is about keeping things interesting, but if you do everything there is to do in the first week, it doesn’t matter who the person is; you’ll get bored of each other.
When you first sit down to a date, you never really know what’s going to become of it. Maybe you sleep together a few times and then part ways, or maybe you end dating for years.
The point is the interaction as a whole has more meaning when it develops organically. She’ll enjoy herself more, and the sex will almost always be better when there’s been time for real attraction to develop.
Taking your time, in both scenarios, makes things more enjoyable for both parties. Maybe you are just interested in sleeping with her at first.
Not knowing when and if it’s going to happen is pretty thrilling, as long as you don’t take your dating life too seriously.
Guys that get denied sometimes take it personally and let it ruin their day, but the truth is that when a girl denies you and still wants to see you again, she’s still just making up her mind, so give her space.
There is something to be said about girls who make a guy wait too long.
Weeks or months without letting things progress even a little bit might be a sign that she’s just craving attention, or maybe just wants to be friends and can’t find a way to say it.
These are things to watch out for because, while you may like her, your time is precious and can’t be spent waiting an egregious amount of time for her to decide what role you play in her life.
This kind of situation does happen, and it’s up to you to know the difference between a girl who’s just making up her mind and a girl who’s stringing you along.
Next time you’re on a date, and you catch your mind wandering toward how you can get her into bed, check yourself. Focus on what she’s saying, and realize that to sleep with her or make her your girlfriend, you may have to chill for a while.
Enjoy the process, come up with creative date ideas and don’t take it personally when she says she isn’t ready to sleep with you or to meet your parents.
When the time is right, it’ll happen and will be way more meaningful for both of you.

The Seven Pillars: How To Date Beautiful Women
Nailing The Approach: Talking To Women And How To Always Get It Right