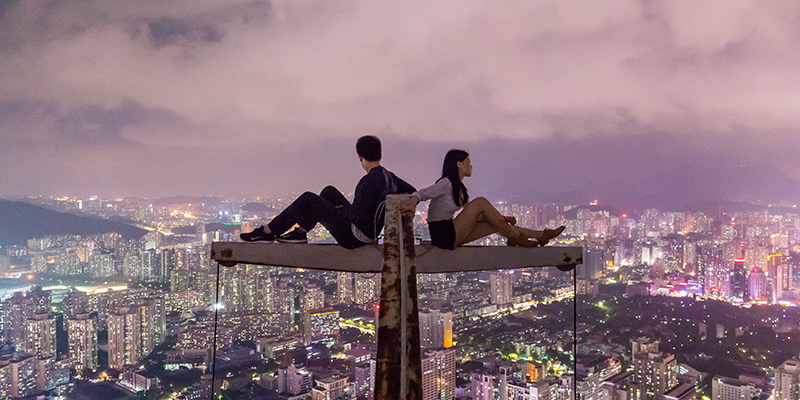 Live In The Moment: Why It’s Okay To Not Want A Relationship

When you’ve been seeing a girl for a while, but have kept things relatively non-serious, you may reach a point where she puts a little pressure on you.
At the very the least, the idea of a relationship may get tossed around between the two of you, even if it’s not something either of you originally wanted.
It’s almost like it somehow becomes a guy’s responsibility after sleeping with a girl for an extended period of time, to officially date her.
If he doesn’t, society says he’s a player or a womanizer and took advantage of the girl’s emotions.
By simply explaining that he is not interested in a committed relationship, a guy can get hit with some serious criticism.
Maybe in some cases, it’s justified.
If a guy has been seeing a girl for a while and has said things he doesn’t mean in order to get sex, then yes, he’s essentially a liar and deserves to be criticized.
But is it fair to point fingers at a guy who decides to put a limit on how far things can go with a girl he’s seeing? Does he not deserve to have that right?
Girls do this all the time for any number of reasons. He’s not the right one. The sex wasn’t good. I’m really focused on my job and don’t want a relationship.
And yet they incur no criticism for kicking guys to the curb at a moment’s notice.
A lot of the time they get congratulated for it by friends and family members who prefer she stay single.
Imagine being rewarded for dumping someone you’ve been sleeping with?
It all just feels a little unfair that a girl can date a man in whatever capacity she wants, only to toss him aside without the repercussions of feeling like she took advantage of him.
This is why it’s perfectly okay to decide you don’t want a relationship, even if you’ve been sleeping with someone.
Consider the following scenario: you meet a girl.
You go on a date, and at the end of the date, you sleep together. It’s good. Really good, and you actually both get along pretty well. Weeks go by and you keep hanging out together.
Sometimes it’s just to have sex, but sometimes it’s just to chill. Everything has been generally fun and carefree, and the word relationship has never come up.
You consider what it would be like to date her seriously, and don’t think it would be that bad, but your life is a mess right now.
You’re still working on finding the perfect job, have tons of stuff you want to accomplish, and know you won’t be able to devote the time to another person in the way you’ll need to in a relationship.
You tell her, and she calls you a typical guy, walks off in a huff and you never hear from her again.
Who’s wrong in this situation? It’s probably her, but in a way, it’s not her fault.
She’s been taught that men are all sex-crazed maniacs who will do anything to get laid, and your resistance to exclusivity has caused her to lump you into that category.
The truth is, everyone needs to have sex—it’s an essential part of life, but not everyone needs to be in a committed relationship. To say that one somehow begets the other just isn’t fair.
The key is to explain things in a way that doesn’t make it seem as though the girl you’ve been knocking around with is the problem.
Chances are, she isn’t, but it just isn’t the right time for a relationship at the moment.
Explain that you valued your time with her and that things could change, but that right now a relationship just isn’t doable for you.
You may still catch some heat for being honest, but the other alternative is dating someone because of a guilt-trip.
Even if you thought you were doing the right thing by dating a girl, if you don’t really feel like she’s girlfriend material, or you have too much going on to actually commit to it, the relationship will fail.
It’ll be a lot worse after a year when you both realize it wasn’t meant to be, or that your lives are not compatible than knowing it ahead of time.
It also helps to be clear from the get-go, that you’re only interested in having fun.
It may turn some girls off, and make them think you’re insincere, but it can still be an effective way of weeding out girls who may be dead set on finding a boyfriend.
Laying your cards on the table beforehand saves you from her wrath when it comes time to let her know you’re not ready for a relationship.
Again, the worst thing you can do is lead someone on. Under no circumstances should you make a girl think that you want to get serious with her just to get laid.
It’s cowardly, creates a lot of unnecessary stress in both of your lives and really is a bad way to go about your game.
Game is about developing your social skills so that you know how to handle any situation, but it’s also about leaving people better off than when you first met them.
Maybe it’s a one night stand, or maybe it’s a five-year relationship, but you don’t want to leave a trail of destruction and streaky mascara wherever you go.
So bear that in mind next time you’re walking up the stairs to some new girl’s apartment.
Make it clear that you’re just living life one day at a time, and never feel obligated to date a girl just because you’ve been messing around with her.
Date her because you want to, not because you have to. Or don’t. It’s really up to you.