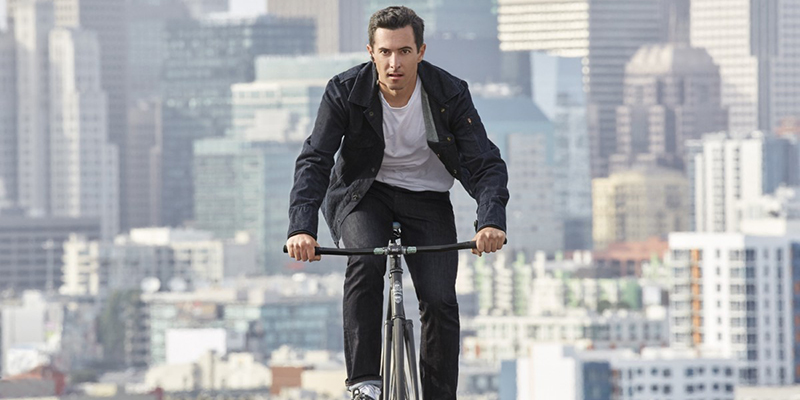 As technology becomes more and more advanced, companies seek to establish total connectivity between their devices.
You can stream from your computer to your TV, or send a text from your computer, or surf the web in your car.
Devices like the Apple Watch were ideated so that all of your technologies were interwoven through a singular item.
But the aesthetics of the Apple Watch, and other products like it, can be a little daunting for guys with more everyman sartorial tendencies.
That is to say, it can be hard to look like a badass with a piece of technological hardware on your wrist.
Maybe you’re one of those guys that doesn’t give a sh*t about shallow things like this, and that’s fair enough, more power to you.
But… if you do care, Levi’s and Google have teamed up to create the ultimate cross between every day American style and the craziest technology in the world.
The Levi’s Commuter Trucker Jacket, introduced at SXSW in Austin this week, looks like any normal, crisp Levi’s jean jacket, the only difference being that, well, there is a frickin’ computer built into the left sleeve.
Yeah, a computer. In the sleeve.

With Google’s Lacquard technology into the jacket, users will be able to access Google apps with a swipe or touch of the sleeve.
The jacket was designed specifically with active commuters in mind (cyclists, skateboarders, etc.), but the seamless design makes it practical for anyone who wants to look fresh, but is also technologically inclined.
Here’s a more specific description of the jacket, per Levi’s website.

“The discreetly placed Jacquard technology is literally woven into the jacket, allowing for simple gestures like tapping or swiping on a sleeve to activate functionality. Of course you can wash it, just like you do with any other jacket.”

Just goes to show, technology is going to keep getting more and more integrated, I mean a jean jacket with a computer built into the sleeve is… pretty awesome.
The commuter jacket won’t be available until the fall, but be sure to have one on pre-order. I know we will.

Sleep Or Success: This Is How Much Sleep Billionaires Are Getting
This $2 Million Bugatti Yacht Has A Frickin’ Jacuzzi Built Into It