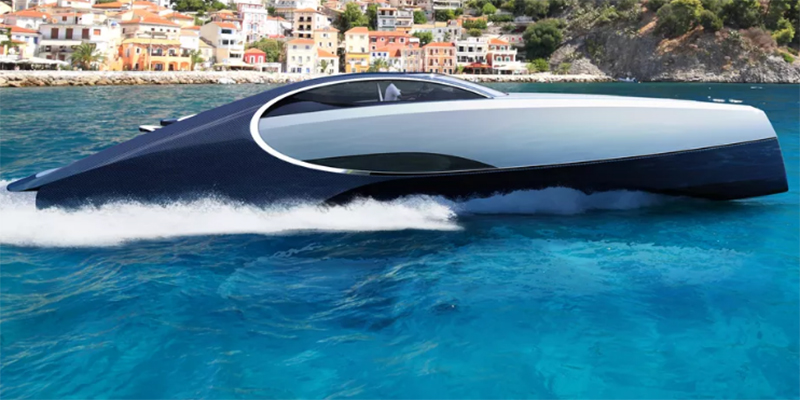 Not to generalize here, but mega-rich people are, um, not the most subtle of people.
Whether it’s building homes within homes, cars that can surf the internet, or whatever new thing that wealthy people are adding to their lives, luxury isn’t always (never) that practical.
So, with that said, let’s take a look at the new Bugatti superyacht, a $2.2 million boat that looks like something from a Bond movie.

The origin of how the Bugatti boat came to be goes like this.
Two years ago the French luxury automakers teamed up with yacht magnate Palmer Johnson to come up with three yachts that held the Bugatti name.

The series was named after Bugatti founder Ettore Bugatti’s daughter Lydia, using her nickname Niniette.
Sticking to tradition, the Ninette yachts boast the classic blue of Bugatti automobiles, as well as being coated in titanium and carbon fiber.

This particular boat, the Niniette 66, is the first of its line. If you’re familiar with the aesthetic design of Bugatti vehicles, you will recognize the trademark curvature of the boat.
Unlike Bugatti cars, the Niniette 66 is probably not going to win you any races, topping out at about 50 mph (44 knots).
At 50 to 80 feet long, the first Ninette is a pretty decent size, and with some of the other little trinkets on board, you may never want to leave the boat.

I mean, there’s a fire pit, a champagne bar (it’s a French company after all), a sun pad, and a frickin’ jacuzzi on this boat.
The mega-rich will continue to figure out ways to jam a whole bunch of luxury into a small space.
This is a completely ridiculous piece of machinery, built for people who can spend over $2 million on something that doesn’t really actually function that well.

That being said… we really want one.
Continue Reading