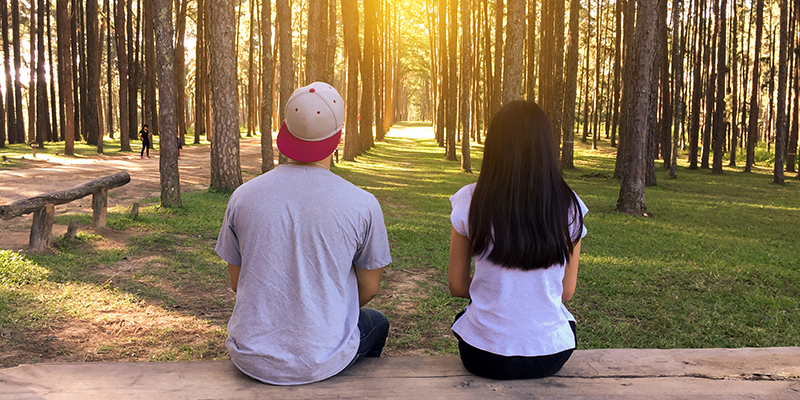 Catching Feelings For A Friend: What To Consider Before Making Her Official

This is not a piece questioning whether or not men and women can abide in a platonic space.
If you consider yourself a man it’s expected that you’ve developed enough discipline to see women as human, as people, rather than lustful benchmarks we set out to conquer.
Not only can men and women be friends, but they can be the best of friends.
That is: being someone to confide in, someone you can trust, someone you can be there for as well as count on to be there for you.
Dispelling the notion that there must be a limit to the emotional proximity men and women share is still a part of the jaded optics of women and men relations that mature, responsible, and good men must be actively a part of.
What this piece is about, however, is what to do if those feelings do come up and what to consider.
At the end of the day, we’re human.
While maintaining a platonic relationship is very possible, it would be dishonest to say that catching feelings wasn’t a reality and it would be a disservice to ignore or dismiss the cases in which romantic ambitions organically developed.
You can meet someone with absolutely no intentions of establishing a bond of any deep significance and end up lying awake in bed at night unable to stop seeing their face.
What makes dating a woman who is your best friend complicated is pretty obvious: she’s not a stranger, she’s your friend.
There’s this really cool quote from American writer S.E Hinton that reads: “If you have two friends in your lifetime, you’re lucky. If you have one good friend, you’re more than lucky.”
Girl, boy, dog or alien, good people are hard to come by, which makes great people even rarer.
Knowing this, it should be noted then, that there is more at stake.
Breakup with your girlfriend and you still have your friends. Breakup with your girlfriend who also happens to be one of the most influential people in your life and you lose much more.
Before pulling the trigger on making your friend your lover you should be sure in how you feel — it’s important to know the difference between having love for someone and being in love with someone — consider the potential complications and be aware of whats at stake.
If you do these three checks thoroughly, you’ll be ready to tackle whatever lies ahead.

Be Sure In Your Feelings

There is a big difference in being in love and having love for someone. Because we are men, we can easily mix up the two because of testosterone, attraction, and good vibes.
But it’s important we differentiate our admiration and respect for a woman from wanting to take care of them and having them trust us with their heart.
Because relationships are so pivotal — in terms of shaping the way we feel and are able to love — we have to be hyper aware of the effects of a bad union, then consider if that’s something you want for you and your best friend.
The last thing you want is getting in a relationship, awakening the love of a woman, only to realize what you were feeling was the nostalgia of your history.

Perfection is a myth and whether you were getting in a relationship with someone you met on Tinder or your high school friend, there are going to be hurdles to conquer.
The difference is that when dating your best friend the hurdles are a tad bit different.
One of the first challenges of dating a friend is that you’re going to inevitably shift the dynamic of your entire friend group.
More likely than not you’re going to have mutual friends with someone you’ve been close with for years, so when you date them, you’re going to have to make a few adjustments to the way she’s treated, talked to and cared about with everyone else that’s known the two of you for a while.
You’re going to be more sensitive to the cracks and jokes that come her way, where before you might have ignored them.
You’re going to feel some type of way about who she hangs out without you as well as the activities of choice, and you’re going to play favorites — as in you both are going to be less available to the rest of the group.
Another complication that may arise is the nature of your relationship with her.
As friends, you may have developed an informal, laid-back rapport with her, but as her partner and as a man it’s your responsibility.
Understanding that you have to step up when becoming her man is something you must keep in mind as you two become official.

There Is More At Stake

If the chances of remaining civil after your relationship with a stranger is slim, your chances of having cordial relations after breaking up with a friend are even slimmer.
Switching from friend to lover is much easier than switching back from lover to friend. Something happens during the transition that makes them feel completely different.
The foundation that the friendship was built on is not only changed but it’s fractured.
It’s naive to think everything will be the same. Imagine entering a new relationship. How can your friend (aka your ex) be close to your new union given your new past?
You’re not only asking your girlfriend to cope with having a best gal pal but having one that you were once intimate with. And vice versa.
Could you blame her new boyfriend for not wanting you around her?
Of course, there are chances of it all working out, where you’re riding off into the sunset with the one person who understands you best.
But that is a great risk; a risk you should be aware of before taking the chance

Playing Hard To Get: Why Turning Her Down Will Make Her Want You More
The Comeback: How To Start Dating Again After A Long Hiatus