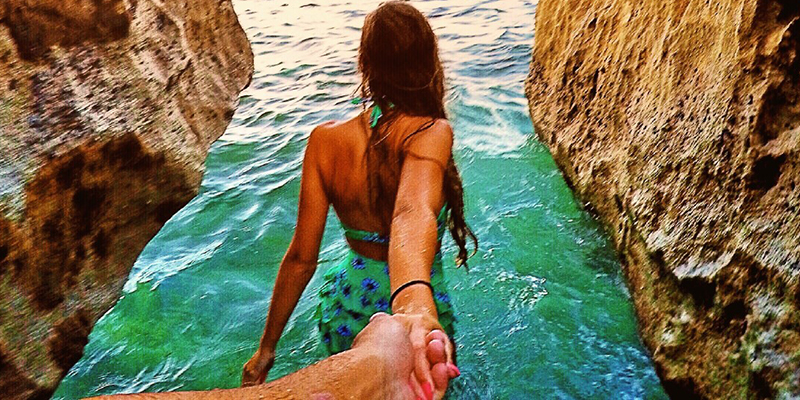 It takes time to get to know someone. When you meet a girl for the first time, she’s probably hiding all of her idiosyncrasies, quirks, and the things about her that maybe make her less, or perhaps more, desirable. That’s totally okay; guys do it too.
Remember that Triforce tattoo on your shoulder from The Legend of Zelda that you hid from her for a week? It’s not lying. It’s more like omitting the truth to make a good first impression.
The big issue with this is that it makes it hard to really know what you’re getting yourself into. You may see a girl for a month, and think you know who she really is when in reality you don’t have a clue.
A scene from the movie A Bronx Tale, comes to mind. If you haven’t seen it, at least check this part out. Chazz Palminteri’s character, Sonny, mentions something called the door test.
Essentially, it’s a way of seeing if a girl is the real deal and is worth seeing for the long term. This movie takes place in the 60’s, when you had to reach over and unlock a car door manually. According to Sonny, if you let a girl into your car, and she doesn’t reach over and unlock the driver’s side so you can get in, she’s selfish and you should dump her. Fast.
It’s funny the first time you watch the scene, and it feels a little rudimentary but the lesson is timeless. We may not have old-fashioned cars to use as a litmus test for trust anymore, but girls are still girls, and can’t always hide their true colors.
On a first, second or even third date, you can’t just sit back and let yourself be unaware of behaviors that lead to larger character flaws.
You may be blinded by how hot she is, or the fact that her secret talent is pole-dancing, but always keep the bigger picture in mind. When you see that red flag waving high, take a breath and realize that it might be time to break it off.
You’ll save yourself a headache, and won’t find yourself in a situation where she’s totally shocked when you say you want to part ways.
Here are a few dead giveaways that she’s not girlfriend material.

She only pretends to care about your accomplishments

You have to have some level of intuition for this one, but generally it’s pretty easy to see when a girl cares and when she doesn’t.
If you got a promotion, got cast in a movie, or hit a new PR in the gym, but she seems like she can’t wait to talk about something else, it’s probably not a good sign.
She doesn’t have to gush repeatedly over the things you’ve done, but if her reaction is lukewarm or even a little negative, don’t let it slide.
Your accomplishments are a part of who you are, no matter how small, and if she wants to be in your life, she should be genuinely happy that you’re succeeding.

Things are going great. It’s Saturday, she spent the night at your place and you have plans to get breakfast at that vegan place she’s been dying to try. It’s almost too perfect, and then she starts a fight about nothing.
It could be over a thing you said, the shirt you’re wearing, or a melodramatic conversation about whether or not you’re taking the relationship seriously.
She has every right to voice her concerns to you and you should listen (after all, you are dating) but when it becomes a pattern you need to be aware.
When the fights are over insignificant things like why you prefer chunky peanut butter over smooth and what it says about you as a man, it’s probably time to send her packing.
You’re not a toy for her to play with when she’s bored, and if you feel that way, run. Run as fast as you can.

She doesn’t say thank you

If you pay for dinner, it’s not some kind of transaction where she now owes you sex. But, on a basic human level, she does owe you the words, “thank you.”
It seems insane to think that a person wouldn’t offer some sign of gratitude for a free meal or trip to the movies, but it happens ALL THE TIME on dates.
Some girls will not only expect you to pay, but then at the end of the night won’t even tell you they had fun. In the very best case-scenario, she’s nervous and she forgot.
In the worst-case scenario she just doesn’t care because guys take her out all the time and dinner isn’t that impressive anymore. Either way, if she’s that far in her own head that she can’t remember basic manners, she’s not worth your time.
Personally, I’ve thanked girls just for being fun and easy to be around, and their eyes light up because it shows them that I’m actually present.
If a girl doesn’t say thank you after a fun night, her mind is elsewhere and she’s not worth another date. Ditch her number and find someone new.

She’s living in the past

If you’re on a date and a girl casually mentions her ex more than once, ask for the check early and see if your friends are out on the town.
She may not even realize she’s doing it, but when a girl talks about her ex on a date, she’s unconsciously comparing you to him. In a way, that’s normal, but is it really something you want to have to think about?
Who knows how long the ex will be on her mind? Is she still going to to compare you to him when you’ve been dating for two years?
She may not even use the word ex, but she may say something like she’s “been hurt before,” or that she’s “recently wounded.”
Unless you’re okay with being a revenge bang for her and then parting ways, realize that being constantly compared to someone else is not the foundation for a healthy relationship.
Both of you should be free of whatever heartbreak you endured in the past, and be fully ready to meet someone new.
Breaking up with a girl is never an easy thing to do. Even though you may not click with her on a romantic level, she’s still a person, and it sucks to have to disappoint someone who may have meant well. But remember, you don’t owe her anything and you’re well within your rights to nip this stuff in the bud early.
Be on guard for signs that she’s not what you’re looking for, and save yourself a word of trouble.

Ghosted?! The Real Reason Why She Disappears On You (Video)
The Theory Behind A Great Date: How To Make Her Night Pop