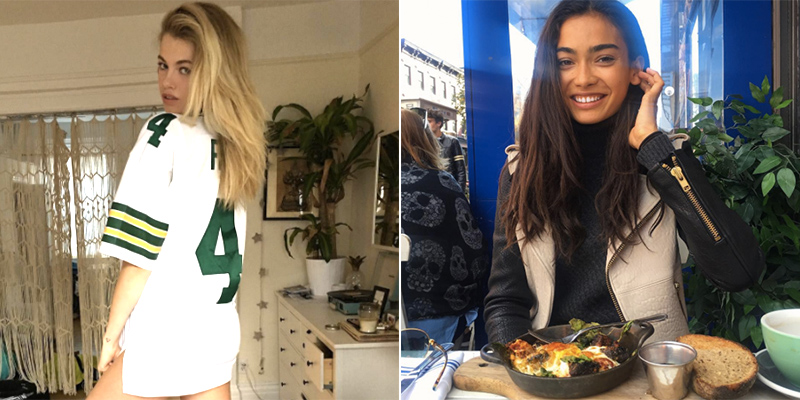 Meet The Real Women Behind The 2017 Sports Illustrated Swimsuit Issue

A dream of mine came true!!!! I am over excited and ultra honored to be in this year’s @si_swimsuit Issue. Can’t wait to see everyone at VIBES festival on the 17th and 18th in Houston! #SISwim

Fun fact about Bianca Balti, She is a 32-year-old former Dolce & Gabbana model, mother of two, and a Sports Illustrated rookie.
It’s obvious that above everything else, Bianca is family-oriented, she’s a mother first.

“I just want to have a lot of kids. I don’t have a lot of interests besides cooking and making kids; At least four, but not in a hurry.”

The irony in it all is Bianca never liked to swim.

“My mom forced me to do swimming and ballet, I never liked them.” She continues, “swimming was very cold.”

Here's the first sneak peak photo of me for the 2017 issue of @si_swimsuit Words cannot describe how lucky I am to be apart of this magazine. @mj_day was one of the few people that supported and embraced me and my body for exactly who I am. I have never felt so confident in my own skin. SI swimsuit has been such an inspiration for me because they are featuring all types of women that we can all relate to. Let's all continue to embrace each other and empower more women!! 📸 @jamesmacari

You may recognize Hailey Clauson.
This beautiful blonde was featured on the cover of the 2016 Swimsuit Edition.
According to the Assistant Managing Editor MJ Day, Hailey is one of those beautiful women that are so cool and down to earth, it’s like they don’t even know just how striking they are.

“Hailey is the cool girl who doesn’t even know how cool she really is. She’s goofy, She’s smart, and she’s completely humble. What’s crazy is you don’t even feel like she knows that when you’re around her.”

Hailey is beautiful, hilarious, and never too cool to have a dance off with a fan. This is why she’s a fan favorite.
Also, check out Hailey’s hilarious sketch on Funny Or Die.

Nina makes her return, as she was featured in the 2014, and 2016 Sports Illustrated Swimsuit Edition.
Not only is she stunning, and attracted the wandering eyes of Leo, she also travels to the dopest locations and takes the coolest pictures.

I am so excited to finally announce that I will be featured in the 2017 issue of @SI_Swimsuit! To work for SI has been one of my goals ever Since I started modeling. Get the behind the scenes scoop on my shoot and an interview with me featured on Swim Daily today! Much love to @jamesmacari for working his magic behind the camera! Thank you @mj_day and all the other @si_swimsuit family for an incredible shoot and making me feel so welcomed. I feel truly honored to be a part of this. See you all in Houston at VIBES by #SISwim next month! 👙😍👏🏽 link in bio

Kelly Gale is simply stunning, there’s no other way to describe her.
Gale has an interesting background as she is of Swedish, Australian, and Indian heritage.
Apparently, Kelly’s favorite things are Iced coffee, speed walks, and great food.
Sounds like a winner to me.

Finally at my familys house for familydinner and little brother @jamiegale__ caught me asleep on The couch exhausted from traveling😬#WhoTheFckNapsLikeThat?! #ThatNapThough👌🏽#WatermelonComa

Myla Dalbesio is the third rookie on the list and she’s just not just a beautiful face.
Her hobbies include art, music, camping, cooking, and photography.
When Myla isn’t modeling, she is on the front lines of major political movements.

Still feeling the love from yesterday. This was outside the rally before the march started. In a sea of people I still felt safe. Never been in such a polite and supportive crowd in my life. So proud to be a part of the 2.9 MILLION people that marched in America yesterday, and I am filled with hope for what we can collectively do in the future. Many thanks to our friends overseas who joined in. Did you march? If so, text the @womensmarch at 89800 and tell them you were there, so they can get an accurate headcount. Let's let 'em know how strong in numbers we really are! ✨💪🏼💁🏻#womenoftheworldunite #womensmarchonwashington #iamwoman #thewholeworldiswatching

Lais Riberio is the 4th rookie on the list, but she is no stranger to the modeling industry.
In 2010 she moved to New York City and the rest was history.
This Brazilian beauty moved up the ranks and eventually rose to the upper echelons of high fashion when she began to walk the runway for big name designers including Marc Jacobs, Vera Wang, and Dolce & Gabana.
It wasn’t until she appeared in the Victoria’s Secret Fashion Show when her legacy as one of the world’s Top Models was sealed.

So excited to announce my 7th appearance in the Sports Illustrated Swimsuit Edition – I had to count that a million times before I believed it! My @si_swimsuit family, I love you! There is nothing like being a part of this brand and this issue. My shoot was in beautiful Zanzibar and shot by the incomparable @ruvenafanador, who is just as wonderful, kind, serene and lovely as everyone has ever told me. He thinks about every little aspect of a photo, every detail. HMU by @peterbutlerhair and @joannegair I LOVE you and am so lucky you allow me to be in your chairs! @mj_day and @darciebaum and @ja_neyney @hillarydrezner and @karencarpk – you are my family. I am proud to be in the issue but SO proud of all the work you guys put into this every single year. I just love you all. Jesus this is dramatic I know! And to all my fellow @si_swimsuit girls, congrats on a beautiful issue!!! I will see you this week in MIAMI!!!! I can't wait to kiss all your beautiful faces!

You don’t need any briefing on who Chrissy Teigen is.
In 2010, Chrissy won Sports Illustrated Swimsuit Rookie Of The Year and the rest is history.
With 10.1 million Instagram followers and a little over 4 million twitter followers, Teigen is easily one of the more popular models in the world, and quite possibly of all time.
This popularity is less about Chrissy’s sex appeal and more about her hilariously addictive personality.
She’s also not afraid to make fun of herself, which makes Chrissy one of our favorites too.

Yes! I am excited to announce that I am back in @si_swimsuit ..I figured with my gorgeous daughters @alexarayjoel and @sailorbrinkleycook by my side whose going to be looking at me! Oh and My kids think I walk on water, so let's not mention the apple box concealed just under the surface. For a preview check out @people.com ..and thank you Sports Illustrated for sending the powerful message that good things come in packages of every size and we do not come with an expiration date! 🌸🌴psI can’t wait to see everyone at VIBES on Feb 17th and 18th in Houston! #proudmomhere! #vibes

Christie Brinkley is one of the most seasoned models in the game right now.
At the age of 63, she’s been in the swimsuit modeling industry for almost 40 years and she’s still bringing the heat!
In the late 1970s, Brinkley gained fame for appearing on three consecutive Sports Illustrated Swimsuit Covers through 1981.
She’s also spent 25 years as the face of cover girl, making the longest run for any cosmetics contract of any model in history.
Here she is with her two daughters. Guess which one is Christie.

Hey Guys get a preview of our @sportsillustrated @si_swimsuit shoot in @people And if you have a couple minutes watch the great video they put together at people.com with behind the scenes from our people shoot and conversation reinforcing body positivity! And thanks everyone for your warm words enthusiasm and sharing our joy! You're the best crowd around! Photog: Fabio Chizzola @people

Skip The Elevator, Taking The Stairs Can Help You Live Longer
Woman Busts Her Cheating Husband Using The ‘Find My iPhone’ App