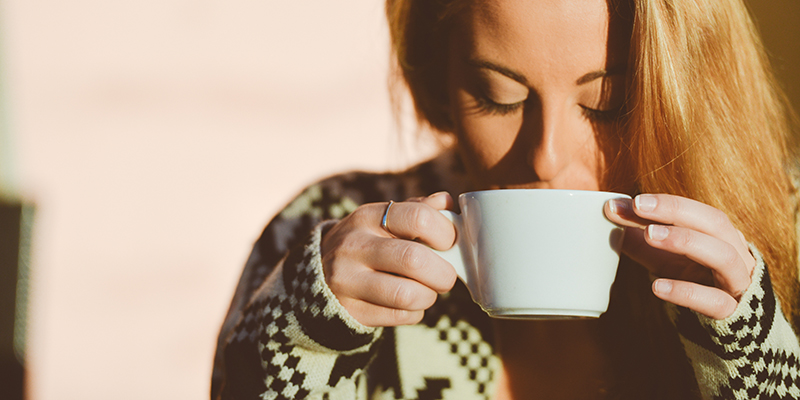 Don’t Sweat The Technique: How To Talk To That Cute Barista Girl

Every time you see her you get heart palpitations.
Nonsense pours out of your mouth a mile a minute and you can feel the sweat dripping down your brow. Could this be love?
Nope. She works in a coffee shop and ever since she smiled at you that one time you’ve developed a four cups-a-day habit.
She’s asked what you want: What type of thing is best/most attractive to order? Should you have the same thing all the time? How to order? Is it good to bring your own mug?
The wait: You’ve ordered your half-decaf, soya caramel frappucino and now you’re just going to stand there like a numpty while she makes it? This is your window of opportunity. How to turn friendly banter into full-on flirting. Talk about rude customers? Ask for extra loyalty stamp?
You sit in: What to do when you’re sitting in? Pretend to write a novel on laptop? Read book?
A genuine compliment is great for baristas – ask her “what’s the story about” a necklace, some earrings, or her tattoo… then tell her you love it on her, and get her name.
When you sit n’ sip, pull out a notebook (skip the laptop – it’s too cliche) and start writing. Or play hangman against yourself… doesn’t matter as long as you look absorbed.
Do this for a few days, and her curiosity about you will be percolating – a perfect time to get her number.
You say “get her number” at the end. But what’s actually a good way of doing this? Do you have to just be direct?

Qualify her to make it seem like you are the one choosing her.

“You always brighten up my day when I see you… we should hang out sometime,” or “you seem like a really cool girl, lets get together sometime when you don’t have to wear a green apron.”
When she says yes, just pop out your phone and say “great, what’s your number?”
Then send her a text then and there saying “hey rockstar, it’s {your name}.”

The perfect blend of cool and personable.

One of the lines you suggested started with “You seem like a really cool girl…” Is there an alternative to this? It sounds a bit too on the nose. Especially if the coffee girl doesn’t quite know if she likes you or not yet.
Do you reckon it’s a good idea to joke about other customers who came before you in the queue? If they were rude maybe?
Also why is it important to make her feel like “you are the one choosing her”, as you mention at the beginning? I assumed loads of baristas would have guys hitting on them.
If the guy was rude, I’d say something like “Man, I hope you throw in some extra sugar, bro needs it this morning…” I think it’s great to speak the unspoken thoughts in a girl’s head, in a funny way.
If it’s INCREDIBLY obvious that the previous customer was a schlub, then it’s cool… but unless the opportunity to make the joke is blindingly obvious, there’s a lot that can go wrong.
Problem is, it took me awhile to get good at this, and I screwed it up a lot along the way. And as general advice, I don’t like to coach guys to do stuff like this until they’ve gotten good at getting out of their own heads.
This sort of joke is a subtle form of rapport seeking, and if she doesn’t “get it” (maybe she’s on auto-pilot and wasn’t even really paying attention) or if the joke doesn’t hit, then it’s worse than if he just left it alone.
I know there were plenty of times I tried stuff like this and the girl looked at me with a big “fuck you, just place your order” look on her face.
And I like “you seem like a really cool girl” because, well… I’ve used it countless times. It is right on the nose, but it’s also not needy. That line, with direct eye contact and a confident vibe… it does everything it needs to do.
Think how Daniel Craig would say it. Well, he’d probably use proper english, but for the rest of the FHM audience, something a little more casual would do just fine 😉
The thing that a lot of guys don’t recognize is that boldness and directness is a much better way to make a girl like them, than a clever line.

Pull The Band-Aid: Why Breaking Up Over A Text Is Actually Okay
Never Compare How She Feels About You To How You Feel About Her