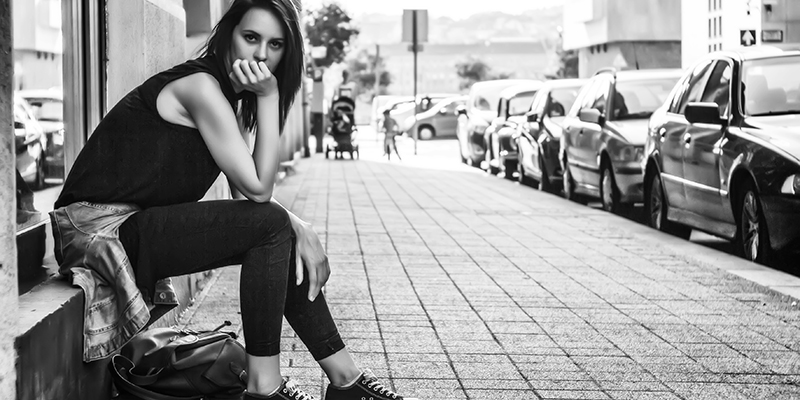 Rethinking Crazy: What We’re Getting Wrong With Difficult Women

Calling women crazy is fun.
Admit it. It is.
It’s the perfect trump card — a scapegoat response of sorts — that gets us out of virtually any unfavorable situation we have with women.
If she breaks up with us, we show a false sense of relief and we deem her as out of her mind.
If she calls us out, speaks her mind, thinks for herself, even if she’s sexually adventurous, she’s crazy.
It’s as if ‘crazy’ is the only way we know how to describe women who don’t act the way women are “expected” to act.
It’s a non-creative way to dismiss women when they make us uncomfortable and it’s also self-destructive to our dating and romantic endeavors as well as the way we see women.
In all actuality, ‘crazy’ women are just emotional women, and emotional women tend to be in that state because of how deeply they care about us.
When you look at it that way, you’ll see that we’re always going to encounter some ‘crazy’ girls in our lives.
Whether or not we deem them as so, depends on mutual attraction and romantic interest.
If you think back on the circumstances men reference to where they concluded women as crazy you’ll find that there is a flagrant double standard.
“She want’s to have a talk, bro. Ugh, she’s crazy. I don’t get why it’s a big enough issue to have a sit-down.”
Yet we’re the ones who will force a serious one-on-one about how she looks when she wears revealing clothing, her best guy friend, or about being honest with her whereabouts.
“She won’t leave me alone. I told her I was not into her, yet she won’t get the message.”
Yet men are the main ones who are notorious for being persistent. Our boys preach the “if you fail once, try again” method. In fact, my Dad proposed three times before my mom said yes.
“She cries over every little infraction I do. I don’t know how to handle her.”
Yet you’re sure to raise your voice when she does something that is in disagreement with an understanding you two previously had.
When we start reshaping what we view as crazy and the standards we have attached to it, our dealings with these women and situations will change as well.
Instead of being taken aback at a girls openness, we’ll see that it means they really care.
Instead of questioning their distraught reaction at our lack of communication, we’ll understand that it’s because they have an unmeasurable love for us.
Crazy has such an insensitive tone and completely diminishes real feelings that these women have. If you notice, when it comes to someone you’re really invested in and love, ‘crazy’ isn’t so crazy anymore.
So whenever you get this overwhelming feeling to call her ‘crazy’, maybe you should be questioning how much she even means to you in the first place.
The root of the issue is even deeper.
Society has painted this picture of what women are supposed to look like, what they are supposed to say and how they are supposed to act.
When we see them breaking these norms, we resort to simple terms like insane and crazy to process what we’re witnessing.
That’s why it’s our responsibility to unlearn these norms and to actually have zero expectation when it comes to what we expect from women.
If a woman wants to wear next to nothing on social media, it doesn’t mean she’s crazy, it means she’s proud of the skin she’s in.
If you see a girl check you and not laugh at your jokes, it doesn’t mean she’s stuck up and needs to get laid, it means she has self-respect and demands it from whomever she encounters.
If she wants to wait to have sex, it does not mean she’s mentally unstable, it means she recognizes the control she has, especially when she says no.
Statements like “don’t stick your penis in crazy” and “I like crazy girls” does nothing more than perpetuate the trite stereotype of what old men felt women’s roles are in our society.
Instead of thinking of women as crazy, think: maybe she’s not for me, instead.
Think about all the times you were referred to as an asshole.
Yes, being an asshole can be a riot, but when you’re not being a jerk and your intentions are being interpreted as a someone who’s insensitive, it hurts.
The same goes for women. Half the time what you see as an overreaction is an honest intent at being on the same page with you at all times. And there is nothing wrong with that.
When you encourage her to go to the gym, it’s not because you’re this cruel individual who wants to make fun of her, it’s because you genuinely want to see the goals she wants for herself.
When you tell her about the quality of her cooking or her spending habits, you’re not trying to be a mean chaperone, you want her to improve.
But only when the right person with the right patience is your partner, will it be taken well.
You don’t want to feel as if your emotions are being swept under an umbrella of a multitude of different men’s actions instead of being read individually.
That’s what happens when you call a woman crazy.
It’s time we, as men, start rethinking what we feel are crazy women.
Crazy isn’t crazy, crazy is too in love with someone who cannot show it back.

It’s Just Dating: Why Being Laid Back Is The Key To Success
Five Essential Rules To Follow When Your Woman Is Going Through A Crisis