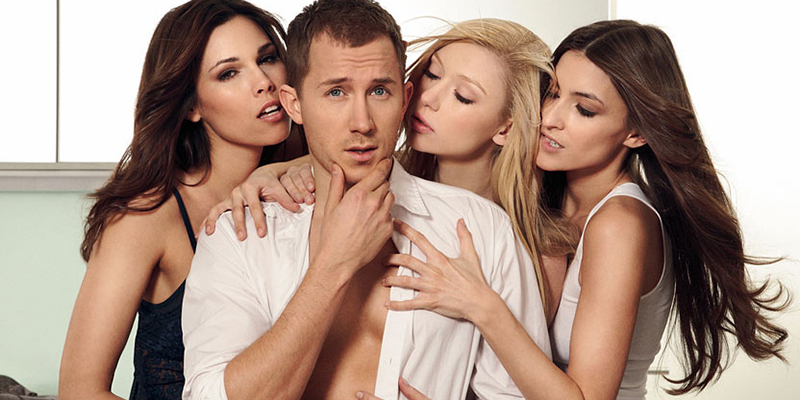 More Is Better: Why Pre-Selection Is Essential For Your Dating Life

Common sense would dictate that a girl finding out that you’re dating a few other girls at the same time wouldn’t put you in a great situation. Every movie, TV show, and book teaches us that men should only date one girl at a time.
If he does otherwise, he’s an asshole. He gets labeled as dishonest, cruel and gets called dozens of names—“womanizer”, “misogynist”, “sex-addict” to name a few. But there’s a fundamental flaw in this kind of logic that, surprisingly, our ancestors could have poked holes through with their spears and arrows.
The main issue is that men capitalize on being wanted by lots of women, but why do they absorb all of the responsibility? It’s a way of keeping society under control, mostly, and kept things organized when we lived in tribes of a hundred people.
But, strangely, before that time when things were a little simpler, having women around you only made others want you more. There were no other external measurements that women could determine your worth, so the best way for her to figure out if you were a male of high-caliber was by seeing how many other females wanted you.
Of course, things were a lot harder in those days (imagine your grocery store being a forest, and your shopping cart being a rock that you had to stab your food with), but attraction hasn’t changed all that much.
Have you ever noticed how girls find guys with kids extremely attractive? It’s old software and we haven’t updated it in about 10,000 years, and for good reason. Things really aren’t any different today than they were back then.
If a guy has good enough game to snag a ten, other tens will notice, whether they like or not. It’ll trigger all kinds of things like jealousy, curiosity, and possibly even immediate sexual attraction.
In the modern day, women don’t need men to make it through the day, but in an environment where physicality was pretty much all people had, early human females needed men to protect them and provide for them.
The need may no longer exist, but the urge or the impulse to have a man who cares enough to keep her safe and healthy is as strong as ever. So, if she sees you out to a nice dinner with a knockout, she may not run over and push your date out of her chair, but she’ll wonder, how did that guy get a girl that hot?
Here’s a quick anecdote. There was a girl who I wanted to hook up so badly that I had to go to some pretty extreme measures. I couldn’t have made this girl up in my head she was so sexy, and I knew she was bartending at a local bar, so I showed up there… with another girl. I ordered some drinks from her, and acted aloof about the whole thing.
To make a long story short, she texted me the next day and by the weekend I had her telling me what she wanted for breakfast the next morning.
Keep in mind, I was not committed to the other girl in any way and didn’t do any cheating or anything. I just showed one girl that I was capable of being around other girls of a high-quality, and it worked like a charm.
As a guy, this knowledge is something to be very careful with. At first, you’ll want to keep making transitions like this, but there are rules. You have to be a decent human being, and don’t think of using other people as pawns for personal gain.
You can let girls see you with other women, and only if they reach out to you, can you pursue them as well. And, unless you want to be considered one of the lowest of the low when it comes to men, never do this with your actual girlfriend. If you’re just running around, having fun, then it’s perfectly fine.
The point is that looking into our past and understanding the mating strategies that our ancestors used is a great place to start if you’re looking to meet more women.
The reality is that Instagram, Tinder, Facebook, and sending goofy little Emojis can’t really hurt you, but as the old saying goes: if it ain’t broke don’t fix it. Your ancestors all knew how to attract women without that stuff, and the fact that you are sitting here reading this is living proof.
Showing that you are preselected says a lot about you to a woman, just like it did back then, because if anyone knows how women think, it’s women! Women know how hot other women are, and when they see one on the arm of another guy they can’t help but wonder.
Whether it’s money, great sex, or something less superficial, they are told by their genes to want a piece of it. It’s actually completely natural.
The key is balance. Our lower brains may still have caveman tendencies, but we can’t go full Neanderthal all the time. We can only use that knowledge to our benefit without emotionally harming the girls we date.
The best way to do this, is to just be honest. Make it clear that you’re dating multiple girls at once; if anything, it’ll make her want you more, and you can decide later if you want to take things more seriously.
Competition is an integral part of finding an attractive partner. Look at shows like ‘The Bachelor’. It’s nothing more than a televised competition for the affection of a preselected man.
If ten women all want you, and they all know about it, they’ll do whatever they can to win you over.
So, next time you’re wondering how to juggle two or three girls in your life ask yourself what Homo-Erectus would have done, and strap in for the ride.