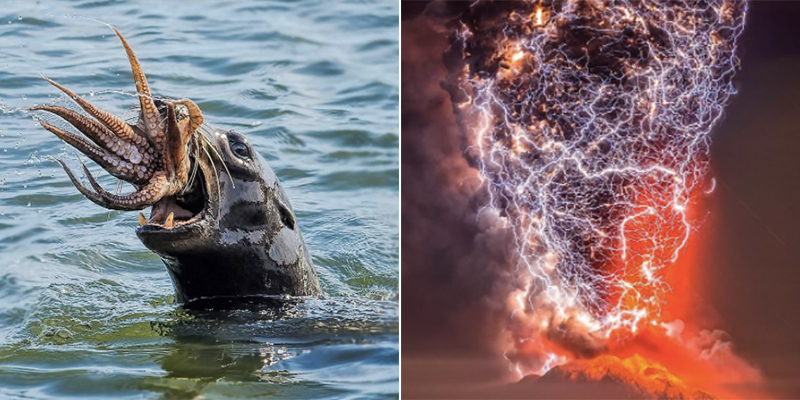 ‘Nature Is Scary’ Instagram Will Make You Terrified To Go Outside

Mother Nature is nothing to be messed with.

If you’ve ever seen Animal Planet, Discovery Channel, or National Geographic I’m sure you would agree with me.

Natural disasters, the food chain, and the natural order of things scare us humans used to our easy lives of iMessage, air-conditioned office buildings, and refrigerators.

According to statistics made by Gates Notes, mosquitos are actually the most dangerous animal on earth, with an average yearly killing of  725,000 people. Humans come in second with 475,000 and man’s best friend in 4th place with 25K.

Surprisingly, lions, wolves, and sharks come in dead last, but that doesn’t make them any less scary.

Natural disasters claim the lives of 415 people a year and cost about $16 million of damage according to a study done by Disaster Survival Resources.

But don’t take my word for it, check it out for yourself via some insane videos from Nature Is Scary. But be cautious this isn’t for the light-hearted.

You ever heard the phrase big fish eats little fish?

You should always test the water before going for a swim in Zimbabwe.

Even if you live in the city you’re not exempt from seeing a bird of prey go in on a pigeon.

A whale swallows an entire school of fish, in one gulp!

Have you ever seen an animal being eaten alive? It’s enough to make your skin crawl.

This night vision cam, captures a leopard snatching a piglet, from right underneath its mother.

Ever wondered what the power of a tornado looks like first hand?

A rolling cloud looks like the beginning of the apocalypse

Have you ever seen a place so cold that the waves freeze in mid air? Now you have.

The myths of alligators in sewers aren’t actually myths after all.

I bet you didn’t know crocodiles could fly, huh?

If you’ve ever seen the show deadliest catch, then you are familiar with dangers of deep sea fishing, these giant waves would instantly humble the hardest of people.

In nature, only the fittest survive.

Here we have a leopard carrying a baby rhino into a tree, keep in mind baby rhinos can weigh anywhere from 80 to 125 LBS.

Whatever this is, its entire head is a mouth, that’s enough for me to never go in the ocean.

If you’ve ever been a boy scout or have seen any basic Animal Planet show then you know when you’re approached by a bear to stand your ground and to never run. I bet you would’ve never guessed a bear in a full sprint looked like this.