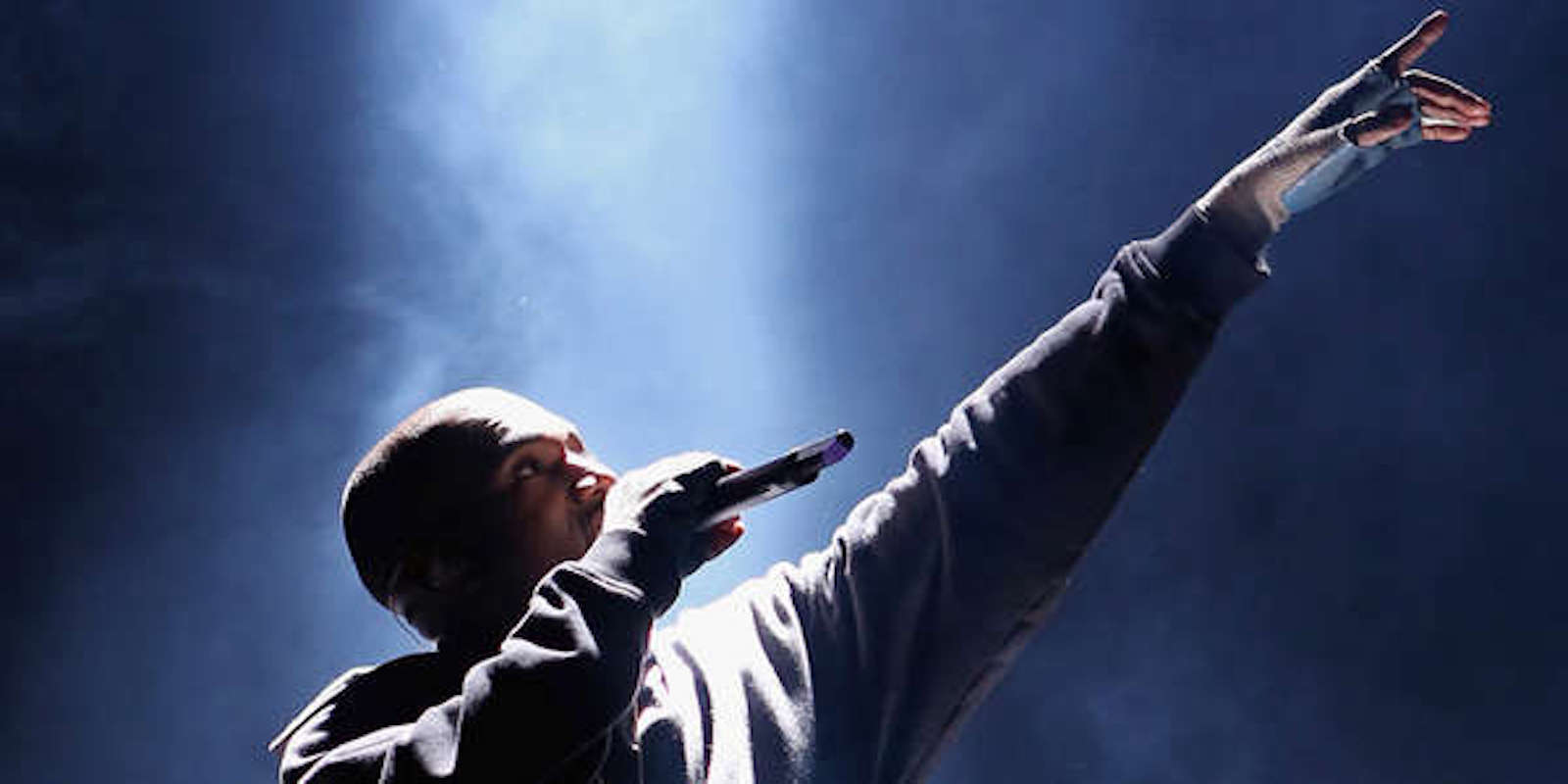 Name One Genius That Ain’t Crazy: 4 Lessons In Self-Esteem From Kanye West

It has been a weird week for Kanye West, one of the most polarizing figures in modern music and culture.
After his Thursday night at his show in San Jose, California, Kanye told concertgoers that he didn’t vote in the presidential election, but he “would’ve voted on Trump” had he voted.
During his Saturday night show in Sacramento, he continued on his senseless rampage, ranting on Beyoncé, claiming she would not have performed at this year’s VMAs had her video, Formation, not been awarded video of the year. And he didn’t stop there, going on to criticize Jay Z, Hillary Clinton, and Mark Zuckerberg.
Mr. West not only arrived one and a half hours late, but he he cut the show short, causing tons of boos from the fans.
Genius, idiot, sell-out, and asshole, are the words thrown around when Kanye comes up, this doesn’t exclude well-established authorities in the hip-hop community.
Hip-Hop talking head and personality on New York’s Power 105.1, Charlemagne Tha God, said it on twitter the best, stating that our reaction to what comes out of Kanye’s mouth is strictly contingent on if it offends us or not. If we agree, then it’s genius, if not, it’s insane. It’s a polarization that stems from a long pattern of speaking his mind and having the art to back it up.

Kanye don't need no damn help. This how he's always been we just don't agree with what he's ranting about right now.

And Charlemagne is right. Confidence is the key to success, and it’s Kanye’s unapologetic confidence that has transitioned him from making “five beats a day for three summers” for chump change, to making beats for Jay- Z, to rapping for Jay- Z, to starting his own label and designing his own fashion brand.
It’s him believing in himself that made him laugh at closed doors and shatter glass ceilings. The same confidence that got him the platform he is on today, is the confidence that keeps any outside voice from getting in.
Let’s look how his confidence has gotten him to the level of success he is at today.
Doubt Leads to Inaction
I think his testimonial on “Last Call” off his debut album defines Kanye, his confidence and how pivotal it was to his success is when he talks about tracking the “It Can’t be Life” in the Roc-a-Fella studios.
At the time being strictly known as a producer, the brash and braggadocios Kanye we know today; the Kanye that compares himself to Michael Jackson and who grabbed Taylor Swift’s mic during her acceptance speech, was the same Kanye who asked to spit a verse while in the midst of probably the hottest rapper on the planet at the time and some would say, the best rapper of all time.
That’s like a Beyonce’s back-up dancer asking to sing a personal song they wrote – it just doesn’t happen. But look how it unfolded, we have one of the most dynamic and influential artists ever. When you have self-confidence, it will have you betting on yourself when no one else will, and at the end of the day, all we need is a chance.
The Drive To Start Things
In the Fall of 2004 Kanye West founded G.O.O.D Music in conjunction with Sony/BMG shortly after releasing his critically acclaimed debut The College Dropout. His progress from producer to rapper to studio head is a result of a single-minded determination fueled by nothing more than a strong belief in self. It’s this uber confidence – arrogance some might call it – that led to the founding of the Getting Out Our Dreams label.
You won’t ever be a self starter, an entrepreneur or a CEO if you do not have confidence in yourself. Kanye’s supreme confidence in himself allows him to occupy areas where other rappers and producers don’ and won’t go.
Because Kanye believes he can do whatever he wants, he actually does, which is the only difference between those who are successful and those who are not.
The Ability To Stand Up For Yourself

Back in November of 2013 Kanye went viral expressing his discontent with the fashion industry on Sway’s New York radio program Sway in The Morning, asking “who’s going to be the Medici family and stand up and let me create more. Or do you want to marginalize me ’til I’m about of my moment.”
Kanye once collaborated with Nike, bearing the iconic Yeezy line in result, but found himself at odds with the apparel giant when he felt that they put creative constraints on him. As a result, Kanye left the company, made a diss track about them (of course) and later signed with their rival, Adidas.
His “How, Sway?” and “You don’t have the answers,” made their way around the internet, but behind the loud rant, it was nothing more than a creative fighting for his voice. A component of confidence that naturally makes it’s presence known.
There are tons of individuals with dreams and aspirations that do not stand up for themselves. A simple conversation about your value to a company may be the only thing standing between you and a raise, but you will never obtain it if you don’t see and hold yourself to a value of high regard.
That is what confidence is all about, and that is the confidence that has sustained Kanye for the majority of his career.
Confidence Overcomes Fear
Say what you want about Kanye, but when you do so please consider his psyche after the success he’s had, the high stakes he’s placed on himself, and what he has still managed to accomplish in spite of it all.
I mean, the guy has won 17 Grammys with album sales over $21 million. He has always been considered an outsider, whether before entering the rap game or fighting for a voice in fashion.
So when Kanye is ranting, he’s only doing what he knows best – speaking from a place than many cannot relate from, a place of no fear.
Kanye will not always be right, but he will always revered for his unabashed and unsheltered ignorance of any perspective other than his own. One can argue that what was once confidence has turned into arrogance, but when you are unabashedly successful, what would be your motivation to change it?
Kanye has now cancelled the remaining 21 shows on his Saint Pablo Tour and is facing the scrutiny of both fans and peers in the music. Confidence is a drug that you can overdose on, which may be the case with the rap legend.
But never be mistaken, a strong belief in one’s ability to overcome and do anything should never be discouraged. It’s a component evidenced in all the greats – from Ali to Jordan. The successful are confident, and there is nothing wrong in that.

How Using The Right Body Language Boost Your Confidence
Mental Toughness Test: Are You Actually Mentally Strong Or Not?