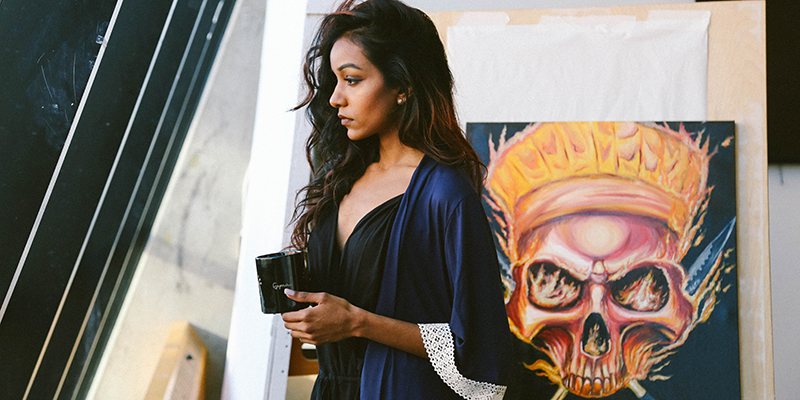 Don’t Play Yourself: How To Know If She’s Leading You On

The hardest thing about the early stages of a relationship is knowing whether or not the other person is for real. Girls, and people in general, date for all different types of messed up reasons independent of actual affection.
It could be your money, it could be a fear of being alone, or worse, she could be spending time with you just to get back at an ex that she secretly still wants to be with.
Everyone likes to feel like they’re getting on someone’s good side on a date but the problem is that kind of euphoria makes it hard to step back and see the reality of what’s really going on.
The fundamental difference between guys and girls is that girls are better at leading people on. Men, typically, are more direct and whatever wrongdoing they commit against a significant other can usually be seen coming from a mile away.
Women on the other hand, are more calculated. They may enter into a relationship knowing when, where, and how they will end it before it even truly has a chance. But there’s hope.
Even the most deceitful and cunning girls will accidentally drop hints that they’re dating you with some other more malicious purpose in mind. Life isn’t a Disney movie, but generally speaking, a romantic situation should be as close to pure as possible.
If she really likes you, she’ll be thinking about you even when you’re not around, and won’t have any reason for coming over to your place other than that she just can’t get enough of you.
You, of course, should feel the same way—it’s what an honest relationship feels like.
It’s a rare feeling—one we all like having—but it can be faked. She could be texting you things that make it impossible to focus at work, bringing your mom flowers, or even giving you great sex on the regular and she still might have ulterior motives.
You can enjoy the process of getting to know someone, and don’t have to be paranoid, but it’s your job to protect yourself against bullshit. Our time on this planet is limited, and so is our time as single men with no attachments to anyone but ourselves.
Wasting your time with a girl who only likes you for your car, or has her heart still in a previous relationship severely lowers your value, and you shouldn’t tolerate it.
Here are four signs she might be leading you on:

She tells you she doesn’t like to get attached

We all have to determine how much of ourselves we want to put into a relationship but if a girl you’re seeing tells you she doesn’t let herself get attached, it should alarm you.
Dating should be organic, without restrictions, and shouldn’t come with a hard and fast set of rules.
If she’s against letting things grow between the two of you but for some reason still wants to see you on a regular basis, it’s time to ask yourself what your role is in her life.
If you get the impression that you’ve become someone to fill up time in her day but aren’t good enough to be her boyfriend, she’s leading you on.

She mentions the future, but you’re not in it

If you’re in bed together after sex, and she mentions that she’s never lived in one place for too long and has plans to move to Paris for a few years, listen to what she’s really saying.
On the surface it sounds like an innocent conversation about fulfilling one’s dreams, but what she’s really telling you that she has big ideas for her future, and you’re not one of them.
She considers you a placeholder for the time being, but in her mind, you have no shot of becoming permanent to a girl like this.
It’s great that she has ambitions, but the longer you ignore the fact that you’ve been excluded from her aspirations, the more time you’ll end up wasting with her.

She only hangs out on her schedule

People in their twenties and thirties are busier than ever, but that doesn’t mean that a girl can consistently decide when the two of you hang out, with no regard for your schedule.
It’s another sign that she doesn’t consider you to be that important, and is not fully invested in you as a person.
When a girl really wants to see you she finds time, just like you would do if you really wanted to see her. But if setting up a date becomes a game where you are constantly working around her schedule, you can and should interpret it as a lack of consideration for you.
She may act sweet when you finally do link up, but the fact that it had to be on her terms is something to think about.

Her attraction lessens the more you see each other

Real relationships blossom more when people open up and show each other who they are. When a girl likes you, she wants to know everything about you—the good and the bad.
If she’s interested in you for some superficial reason, she may get turned off by the real you. You may reach a point where you think you can be comfortable around her, but it turns out that she’s only into the fun stuff she saw on the first date.
It would be great if people only dated for reasons that were truthful and honest, but that’s just not the world we live in.
Giving a girl your time and your emotional investment without knowing what’s really in her mind is a risky move.
Not every girl you meet is going to try and lead you on, but you still have to be on guard for this kind of thing. Your time is too valuable to waste dating someone who doesn’t have your best interests in mind.

Understanding The Female Psychology, As Explained By A Woman
Best Self More Important Than True Self In Relationships, According To Study