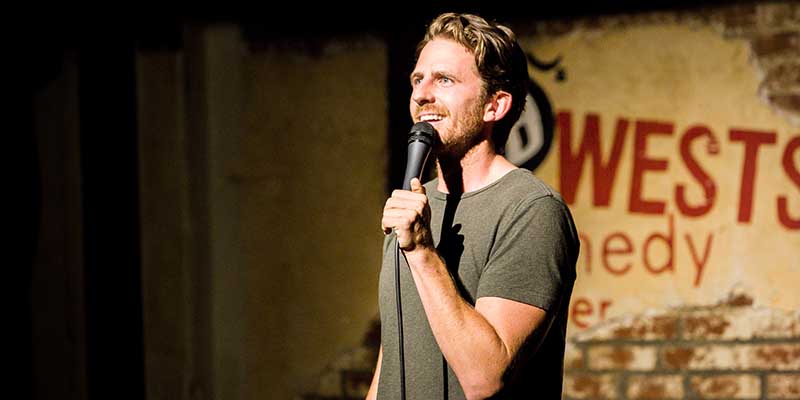 In this series called ‘Date Like A Comic’, I’m going to share examples of tools comedians use that make them a desirable catch in the dating world.
A skilled comedian can command the attention of hundreds at a time, controlling the energy of the room.
It is a muscle carefully crafted, and you can learn to work the same muscle in your day to day conversations. Steal, borrow, mimic and have fun learning in the process.
Just remember, we’re never a finished product. My first few years of comedy I look back very favorably as I bombed in front of crowds of all sizes.
What became apparent to me was that the measure of success was just the act of getting up on stage, and the rest has been falling into place ever since.
Let’s start with the basics.

Dating Is A Seriously Funny Business

We present the best version of ourselves to strangers, in hopes that they will approve. If we have the balls to approach a beautiful woman, only then has the dance begun.
The art of courtship and the uncertainty of success, or often rejection, can be the difference between landing the perfect partner or a night spent questioning what went wrong.
I’ve learned that the similarities between success and failure in both standup and dating are striking.
In this series, ‘Date Like A Comic’, I’m going to offer insight into the techniques that can make a room full of strangers enjoy and trust YOU, as the authority of fun.
While I’ll offer some specific tools and techniques that provide a higher percentage of success when it comes to dating, I’ll also talk about how important authenticity is in today’s dating world.

Audiences have a sixth sense for sniffing out bullshit on stage. (Note that ‘audience’ also refers to whomever it is you’re making a pass at).
The best jokes will fail with a nervous, self doubting comedian.
I believe audiences have become smarter and more skeptical in today’s world, and the ability to gain trust and belief from them is harder now more than ever.
Those that aim to BE funny will fail the hardest. Comedy is about honesty and having an original opinion.
A hack joke won’t work with a smart audience, neither will a stock pick up line work with a worthwhile lady.

I began my journey in the standup comedy world while going through a bad breakup.
I had hit my low, and was so preoccupied about how I was able to fuck up a good thing, that I lost my fear of performing on stage.
I learned first hand how powerful detachment is. Through breakup I learned how important failure could be as it helped mold my identity.
My best wasn’t good enough and I figured that since the humiliation of a bad breakup didn’t kill me, I could face my greatest fears, which led me to pursue standup comedy.
Comedy is the only creative art form that must be practiced in front of a LIVE audience.
Likewise, no amount of rehearsal in the mirror at home will prepare you for the verbal sparring with a woman at the bar.
The point being is that we are never the finished product we wish we could portray ourselves as, so why not get dirty while we figure out our identity.
My favorite mantra is, “Leap and the net will appear”.

Learn To Calibrate From Failure

Most people’s greatest fear is public speaking, but I’d argue that talking to a beautiful woman can be just as nerve wracking.
I once bombed in front of an audience of 300 rocket scientists (no joke). It was a corporate gig for a convention.
I accidentally spilt my drink on some Buzz Lightyear square as I walked onto the stage. It only got worse from there.
As horrifying as it was to look like an idiot in front of a bunch of NASA bros, I still cringe more thinking about this one time in 6th grade that Mikaela rejected me at a school dance.
I still can’t listen to that Boyz II Men song.
No one remembers and over-analyzes failure as painfully as the Self. It’s important to learn the value of self forgiveness, and silencing the inner critic.
Dating, like comedy is about working a muscle.
Over time your voice will lose the quiver of nerves it gets when meeting a new person, and rejection will be something that rolls off the back.

Ground Yourself In The Environment

Normally I begin a standup set acknowledging something obvious regarding the temperament of the room.
Any quick joke that can get a laugh is a powerful way to set up the routine for success. Same goes for meeting women.
You can’t tell a long story until all parties are invested and believe it will have a favorable payoff.
A common line I open up with on stage is, “I know what you’re thinking, I look like every guy that’s been voted off The Bachelorette”.
It’s a quick and simple guaranteed laugh off the bat, acknowledging that I am a straight white dude with a (minimally) basic vibe, making myself the butt of the joke.
I don’t start off my set bashing women. I MIGHT say something like, “I’m a Feminist, mainly because my girlfriend makes more money than I do,”. I’m still the butt of the joke.
The audience applauds at the premise, that I am a Feminist. It’s delivered with a self-congratulatory tone. They laugh at the punch, that I am poor.
When you have the self awareness and confidence to accept the Self, wouldn’t women accept you as well?

Some say that the physical act of smiling tricks the body into being happier. Try it. Smile. Bigger! Now laugh out loud. True laughter has been around longer than written languages.
We’re born with the ‘laugh muscle’. We laugh as a way of agreement. We laugh when we want another person to be happy, and we laugh to ease tension.
There is a fine line though when it comes to making someone laugh versus offending a stranger.
It’s a line that must be walked, danced or stomped upon, in the standup world, and definitely in the dating community.
Most men fear they will be perceived as a ‘nice guy’.

There’s Nothing Wrong With Being Nice

I am a nice guy, but if I walk into a bar and there’s a bachelorette party, I feel every right to walk up to them and make fun of that jumbo penis balloon tied to the Bachelorette’s wrist.
“Geez another size queen. Mine is only about half as big.” or, “Does Macy’s Parade know you stole their float?” You’re in. Or you’re not.
Either way, I’ll have fun on my terms. The right person will vibe with that. This wouldn’t be the opportune time to inform the party of the rising divorce rate epidemic.
Although, full disclosure… I’ve definitely whispered into a bridesmaid’s ear, “Hope this isn’t a costly wedding, I don’t think it’s gonna work out”.
The end result was very favorable.
Date Like A Comic is about enjoying the process of poking fun at the dance of courtship. It’s about having a healthy dose of sarcasm and wit at your disposal.
Keep in mind, the end result isn’t about the attention you’ll command. The end result is the authenticity to speak your true mind in any public setting, not afraid of the outcome.
For more in-depth discussion about dating, sex and life as a comedian, check out my podcast, it’s FREE on ITunes. It’s called The Sex Actually Podcast and we’ve got 250+ hours of interviews with comedians about their sex and dating lives
And Tweet or Instagram me your thoughts @dnealz #DLAC.

Avoid It From The Beginning: How To Get Out Of The Friendzone
Date Like a Comic – Episode 2 – Know The Room