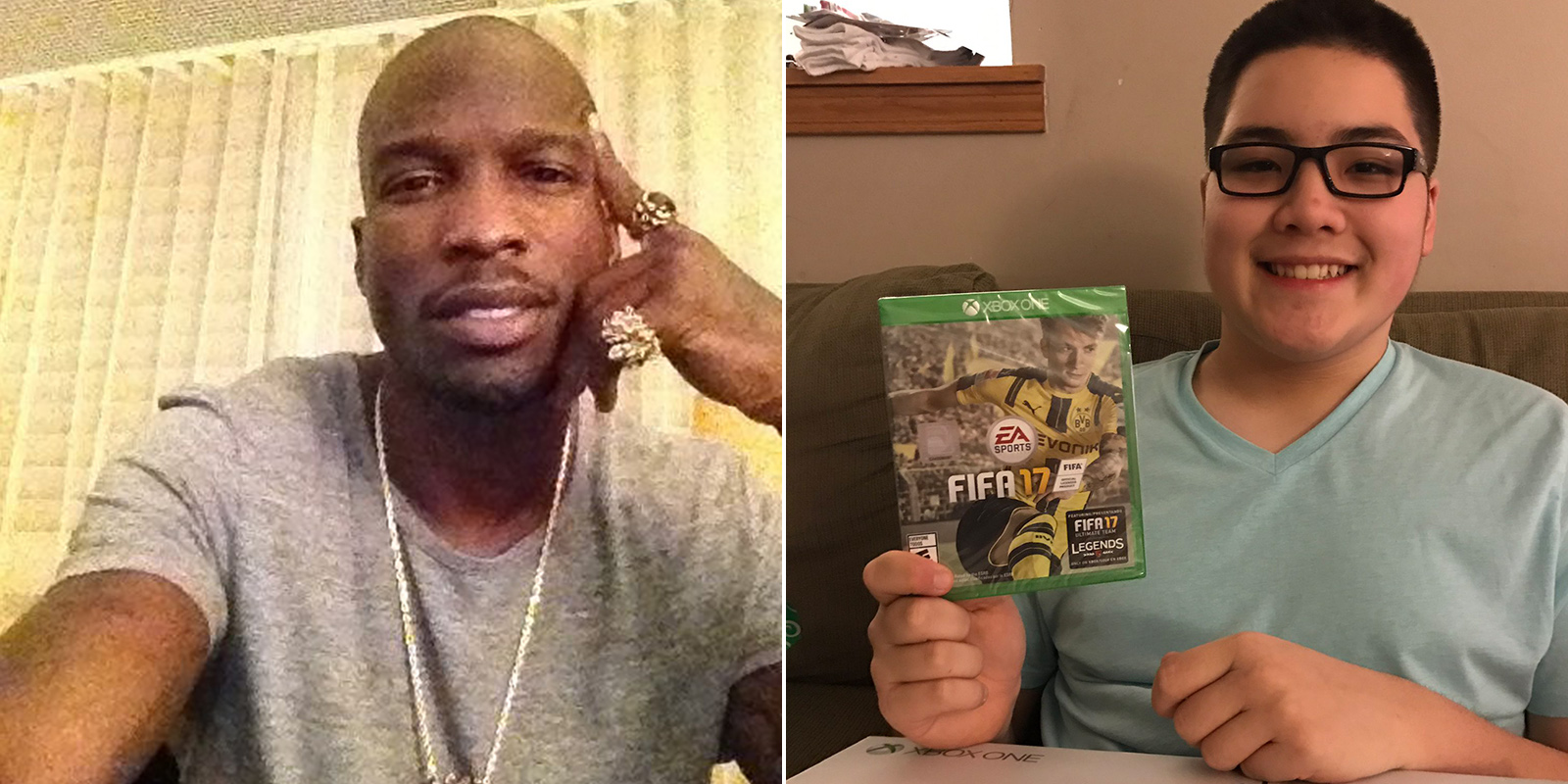 Chad Johnson, also known as Ochocinco, as an homage to his own jersey number, is a huge fan of FIFA, trash talking and making Christmas dreams come true.
Ochocinco is no stranger to Fifa related threats, it has been documented that he will come to your house to lay the smackdown, but this Christmas he went a different route.
The former Bengals Wide Receiver made one fan’s Christmas when a mother expressed her anxiety over not being able to afford the one gift that her son wanted, An Xbox One.
Like a lot of parents, she couldn’t afford her son an expensive video game console and took to twitter to express her frustration.
Chad opens up the conversation by tweeting ” Why are holidays so much easier when your kids are older, gifts are a tad bit more expensive but they only want 1 or 2 items.”
To which Andria responded,
“@ochocinco My 14 year old want’s an Xbox One. Way over budget for me but it’s all he wants”

Watch as the joy plays out.

@ochocinco My 14 year old wants Xbox one. Way over budget for me but it's all he wants ?

Your son wants an Xbox one? An Xbox one he will get!

Your son wants an X Box One he's going to get an X Box One, DM me your address I can send an X Box & all EA related sports games. https://t.co/sI9WxB1kwj

I love you & as I promised along w/ the help of some good friends your son was getting that X Box One so I can beat him in FIFA17 ? https://t.co/LeaCXK8RqX

Christmas Day Comes and the excitement is real

@MojoInTheMorn My son was gifted an Xbox one along with 8 games from @ochocinco , @aarongreenberg and @Ty_Stover Pretty amazing Christmas! pic.twitter.com/gEefqSLB5y

And in true Ochocinco fashion, with a playful jab he threatens to beat him 85 -0.

Incredible is when I beat her son 85-0 in FIFA17 so it's a moment he'll never forget. #MerryChristmas ? https://t.co/Yjk75aEoCr

Other People began joining in, adding into the pot, showing that you don’t need to be a millionaire to give back.

@jjabb05 @aarongreenberg @ochocinco @Xbox Allow me to add to the pot, I have a copy of Rocket League for you if you DM me.

Not only did Chad make that family’s christmas he also started a wave of  selfless giving, reminding us of the true gift of Christmas.
At 14, Julius probably no longer believes in Santa Claus, but it’s safe to say that Santa made sure he knew he was very real this year, in the form of Chad Ochocinco.

When It Comes To Penis Size, This Is What Women Are Looking For
5 Ways Having A Beard Is Actually Making Your Life Better