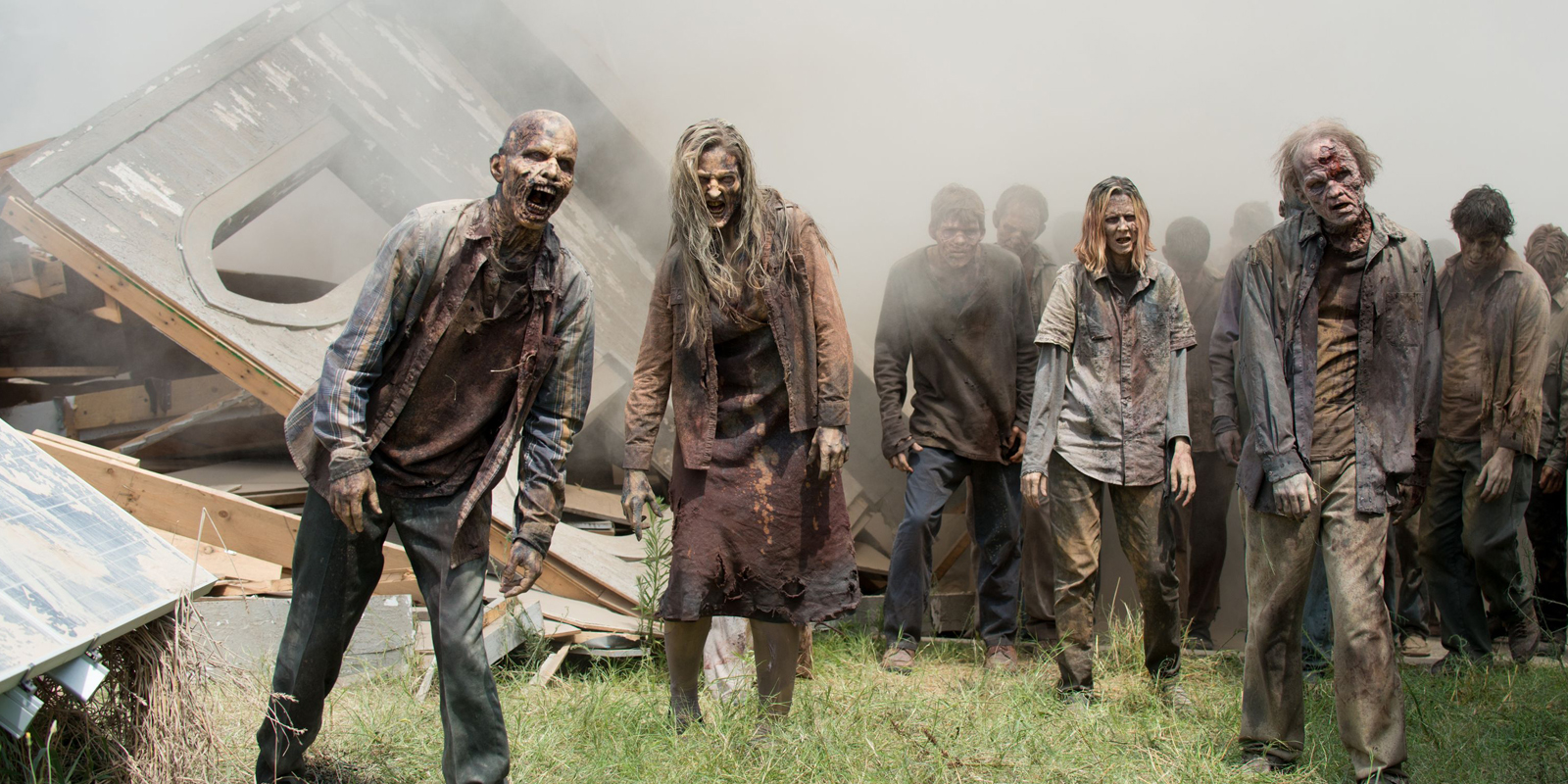 7 Things We Want From the Next Season of Walking Dead

Surprise, surprise. The Walking Dead has left us hanging once again, this time as we await what’s technically the second half of Season 6. It won’t return until February 14, so we have plenty of time for anticipation—and building up our hopes for what lies ahead.

Last we saw Rick and the Alexandrians (in the mid-season finale “Start to Finish”), there was quite a bit transpiring. Morgan and Carol both wound up unconscious after battling over the fate of a captured Wolf. Deanna went out in a blaze of glory after suffering a walker bite. And a group that includes Rick, Michonne, Carl, Jessie and the kids sets out to make their way from a compromised home to the armory (where flares could conceivably draw the invading walkers away from Alexandria). Meanwhile, Glenn and Enid are looking for a way into Alexandria while the pregnant Maggie remains stranded atop a lookout above the swarming walkers.
Got all that?
The last thing we see is Rick’s group beginning to make its way through the hoard whilst covered in walker guts for masking purposes. Jessie’s younger son Sam twice calls out to her, running the risk of alerting all those walkers to the group’s presence.
But what will we see next? And what do we want to see next?

This is bound to happen, right? After leading us to believe Glenn was in fact dead, the show couldn’t possibly kill him again. And being pregnant, it’s hard to imagine the producers killing off Maggie. For the moment, however, the two are separated by the seemingly endless hoard of walkers that have infiltrated Alexandria. So however a reunion happens, it won’t be easy.
But in everyone’s heart of hearts, this is at the top of our wish list.

Jessie’s older son tried to kill Carl, which is the height of uncool. Then Carl took the high road and covered for Ron, opting to handle the situation internally rather than telling Rick about the assassination attempt. Adding insult to near injury, Ron had previously gotten Rick to teach him how to use a gun—all apparently in a bid to use that gun against Carl himself. Again, really uncool.
Some will maintain that Ron definitely deserves to be eaten, but we say “probably” for one reason alone. The Walking Dead often flirts with the theme of redemption, and Ron’s would be a particularly compelling story. We’ve watched Morgan go from being needlessly violent to adopting a far more pacifistic disposition. We’ve seen Tara leave the Governor’s ranks to become one the group’s most trusted allies. Who knows, maybe one day even Eugene will decide to grow a pair.
If Ron came around, it would be a strong vindication of Carl’s decision to essentially give him a second chance. There is, of course, one scenario in which Ron both redeems himself and gets eaten, perhaps sacrificing himself somehow to help save the group making its way to the armory.

Okay, we’re probably not going to see little Sam’s guts strewn about Alexandria anytime soon. But seriously, this kid just wasn’t cut out for the apocalypse. He couldn’t even bring himself to walk downstairs after Jessie’s bloody confrontation with a wolf. And now he’s putting the entire group in danger by calling out to his mom amid a walker bonanza. How is this kid going to make it when things get even tougher? Jessie can’t just keep asking him to pretend he’s brave. It’s not working.
Now we aren’t going to explicitly call on the producers to kill off a kid. That would be a tad harsh. We’re just saying… how on earth can this kid survive? And how will he make it 10 feet without jeopardizing the lives of everyone around him? It’s not a promising situation, and one suspects something will eventually have to give. Much as you have to like Rick, Carl, Michonne and the newly spunky Jessie, here’s to hoping Sam doesn’t get any of them killed.
Even baby Judith knows better than to make noise when surrounded by that many walkers.

Lots More of the Saviors

In case you missed the teaser for February’s return, we’re shown a scene in which Daryl, Abraham and Sasha are stopped by a group known to comic fans as the Saviors (led by the notorious Negan). It appears that the Alexandrian’s two-front war against walkers and Wolves just became an even more complicated affair. I’ve avoided the comics so as to avoid spoilers, but my understanding is that the Saviors become a pretty prominent feature. In a world where we’ve increasingly come to realize that other humans are even more dangerous than walkers, this should mean lots of good action ahead.
For now, it’s hard to see how our road-trio extricates itself from this standoff with Negan and Co. One can only hope Abraham somehow gets a rocket off from that recently-acquired RPG, causing enough blast damage so that they can get back in the truck and make a run for it. For the moment, however, it appears to be a pretty dire situation. What else is new?

So after Morgan and Carol wind up knocked out, the previously captive Wolf takes Denise (the town’s makeshift doctor) hostage and makes his way out into the chaos. That can’t end well for either of them unless someone comes to the rescue. But even if Denise somehow manages an escape, Morgan’s insistence on keeping the Wolf alive has clearly put one of Alexandria’s favorite residents in supreme danger. We, uh, all kind of saw that one coming—all of us except Morgan, anyway.
Now don’t get me wrong. It’s perfectly fine to admire Morgan’s principled stance in a world that’s largely abandoned idealistic values. But with seemingly every episode, we’re witnessing the impotence of those values in the post-apocalypse. It’s a central theme for the show. How do we maintain our humanity? How do we avoid becoming like the walkers, both literally and figuratively? There has to be some kind of middle ground, and that’s precisely what most of the lead characters are searching for—from Rick to Carol to Michonne.
But while one can admire Morgan’s more merciful approach, it would be nice to see him understand the complexities and gray areas inherent in this brave new world. He’d like to believe that “all life is precious,” but much of that life now seems mutually exclusive with the group’s survival—and that’s a problem. If Morgan comes around and gets his hands dirty, it would be an impressive and rewarding transformation.

There isn’t much time for getting it on these days, but we’ve already seen the seeds of this relationship planted. Abraham definitely has a thing for Sasha, and she doesn’t seem entirely disgusted by the idea. More, please.
The big question is what this would mean for Rosita, Abraham’s ostensible girlfriend at the moment. It’s awfully hard not to like Rosita, but maybe she could do better than Abraham. Maybe she could even take Daryl’s mind of that lost motorcycle…

More of the Same

I’ve watched The Walking Dead pretty religiously since its inception, and my biggest wish of all is for the producers and writers to keep on keeping on. There will most assuredly be twists and turns none of us can even begin to imagine, and that’s a testament to this show’s increasingly savvy storytelling. It’s probably not a stretch to suggest every season has been better than the last, and that’s good news for the second half of season 6. The stage has been set for some serious action and intrigue. The follow-through seemingly can’t go wrong.

Tell us what you’d like to see in the second half of the season in the comments section below!