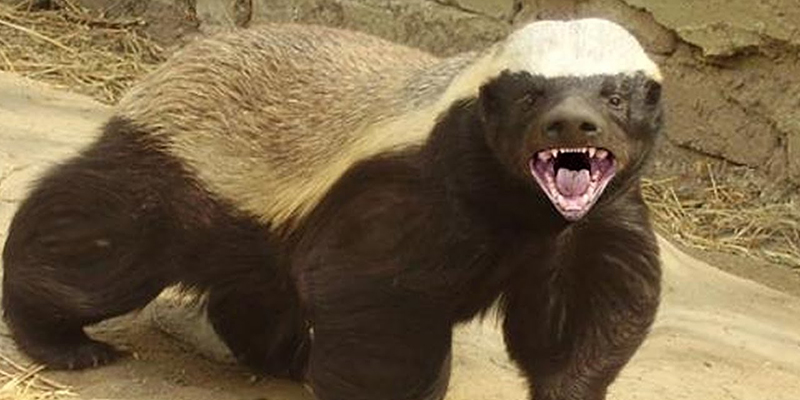 Life Lessons We Can All Learn From These 5 Badass Animals

Nature can teach us a whole lot of lessons, the first being that the universe doesn’t give a single shit about you. Case in point: Watch any movie about dudes getting stuck in the wilderness.
While it might be easy for us to forget these truths from the comfort of our soft apartments with house cats and vertical gardens, there’s a whole group of creatures that never, ever forget: wild animals.
For them, it’s a daily Thunderdome of survival. Animals do whatever the hell they gotta do to keep breathing. Some of them settle for a timid life and eat leftover scraps. Some don’t.
And some … really don’t. Today’s we’re talking about that latter group.

You think you have it tough trying to get laid? I have a Pacific salmon on the line. He says, “That’s cute.”You see, whatever your struggles with Tinder may be, the Pacific salmon truly have it worse.
First, they launch themselves into freshwater and begin swimming upstream, which basically makes CrossFit look like a bunch of jumping jacks. At this point, they’ve stopped eating so their stomach withers away to carry more sperm or eggs instead of food.

They evade fishermen and bears until they reach the end of their journey – back to where they were born – and meet up with a whole bunch of other salmon.
They all proceed to have sex until they die, giving life to a new generation of salmon.
The lesson? Next time you think the dating game is rough, think of what the Pacific salmon goes through just to have sex for the first and last time of its life. Dating is a breeze compared to that.

Wrong. The mongoose consistently wins this fight, and the most interesting part is that the mongoose isn’t even doing it to eat the snake. They get their food elsewhere, so they’re really just going around brawling with cobras and black mambas just because.
The lesson? The thing or the person that everyone else is afraid of? You might actually be stronger than it, but you won’t know until you actually try.

These wasps are not to be messed with. Firstly, they’re huge:
And secondly, they have one of the nastiest insect stings on the planet. To put it in perspective, this guy Justin Schmidt invented the Schmidt sting pain index, which ranks painful stings and bites from one to four.
A one would be a fire ant, which is still pretty damn painful. The tarantula hawk?

One of the only insects to score a four.And not just any four, the kind of four that makes Schmidt consider adding a five to his index. Perhaps Ben Hutchins, biologist Texas Park and Wildlife, said it best:

“There are some vivid descriptions of people getting stung by these things, and their recommendation—and this was actually in a peer-reviewed journal—was to just lie down and start screaming, because few if any people could maintain verbal and physical coordination after getting stung by one of these things. You’re likely to just run off and hurt yourself. So just lie down and start yelling.”

That’s right, the tarantula hawk’s sting is so legit that it renders you utterly useless. The pain supposedly wears off after three minutes, but it sounds like you may need a few years with a therapist to get over the emotional trauma.
The lesson? Not sure if there is a life lesson in here for self-improvement. Just stay away from these guys.

The mountain goat is awesome because it’s the world’s greatest rock climber. On level ground, this guy would be meat within the day, but on a steep, icy mountain, he grips when everyone else slips.
Look at this mountain goat just savaging this rock face:Mountain goats also have a 12-foot vertical leap.

The lesson? Play to your strengths. If you’re subpar somewhere, why spend your doing that?
Find a place where you truly excel or a skill that truly sets you apart, and build your life around that. You’ll be much more successful as a result.

From a looks standpoint, the honey badger got the raw up of the deal. It looks like a little bear wearing a really awful toupee.If this animal was a human, it would receive merciless taunting in school.
But would the honey badger succumb to all of the teasing and resign itself to a life of a loser?
Hell no.
Honey badgers defend their territory so vigilantly that they have been known to attack and chase horses, buffalo, and even lions – just for stepping on their property.
In fact here’s a video of a couple of honey badgers rolling up on a pride of lions and kicking some ass – just for the lulz:

The lesson? Your appearance doesn’t matter. You don’t have to look like Dwayne Johnson to be a badass.
You see, at the end of the day, we’re really not all that different – it’s just that things like jobs and self-awareness and social media and embarrassment get in the way and make it all seem a lot more complicated.
We all have challenges in life and have to face things that we’re rather not. You could shy away from them, or you could take a cue from these badass animals and attack those challenges head-on. It’s up to you.