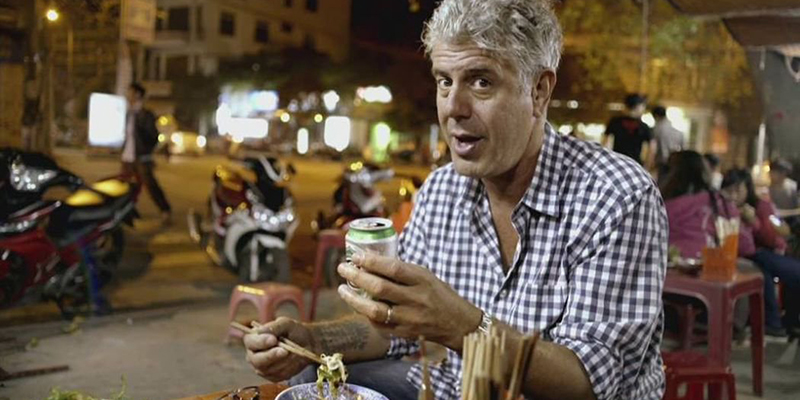 The Key To Anthony Bourdain’s Success? ‘The No Asshole Rule’

You may know Anthony Bourdain as the world renown chef with distinguishable taste, but it has not always been that way.
The chef did not see real success until age 44 with the break-out success of his memoir, Kitchen Confidential.
Up until then, he was a struggling cook trying to put the pieces of a career together, battling addiction, and bouncing around the New York culinary playground looking for solid footing.
Now, 60 and an Emmy award-winning host of “Parts Unknown,” Bourdain shared the journey of overcoming such unforeseeable odds in the underworld of the industry.
In a recent interview with New Yorker editor David Remnick for “The New Yorker Radio Hour” podcast, where he revealed his simple solution to avoiding burnout: “The No A–hole Rule.”
He maintains zero tolerance for it in each endeavor he enters.

“I’m very fortunate,” Bourdain told Remnick. “Absolutely everyone I do business with I like. I always ask myself look, there’s a lot of money involved here, but if the phone rings at 10 at night, am I going to go, ‘Aw, damn.’ I’m not going to do that.”

It’s a philosophy that’s behind his standing relationship with his very first partners in the production company Zero Point Zero Production, who have been with him since his first show, “A Cook’s Tour,” in 2000.
After spending 16 years exploring the world, Bourdain has realized what’s most important to him in life, which has helped him prioritize quality of life and his happiness.
“Life is too short, and bad things, as I found on the road in my travels, can happen at any minute,” he said, adding that he didn’t want to have to be ashamed of any project he pursues.
He went on to explained that he’s able to soak in his success and, as he told The New Yorker, actually enjoy it.

“I get to work with people who 10 years ago I wouldn’t have dreamed to have been able to work with. And that’s a big change professionally, and it’s something that I think about a lot. How can I creatively have fun, do some interesting stuff, not repeat myself?”

It’s “The No A–hole Rule” in action: “Have fun. Play in a creative way. I like making things.”